A House With Character

I loved the character-filled house when we first went to look at it. It was older, and charming, with its cozy little rooms tucked into corners and its gently creaking wood floors. There was a large yard behind it, with a pretty, if overgrown, stone garden lining one side of the house, and we had family already living happily just a few doors down the street from where it stood. We would have work to do if we decided to make it our home, we knew -- the basement was creepy in its unfinished state, the kitchen and bathroom fixtures sagged tiredly, and the walls were faded and dingy from years of being bathed in dust and sunlight -- but we had never been afraid of working for what we wanted. We saw there was inherent promise in this well-worn house, so we hammered a For Sale sign into the lawn of our existing home and embarked on a new adventure.

For two weeks we owned both houses. We wanted to give ourselves time to tackle the most demanding renovation tasks, so that the place would feel comfortable before we uprooted our two small boys from the first home of their lives. In the evenings and on weekends, Matt and I took shifts, with one of us staying back to care for the boys, and the other going over to our newly purchased house to dive determindedly into our to-do list: stripping stubborn old wallpaper patterned with smiling bunnies and gaudy wildflowers from the walls, ripping out the kitchen cupboards and floor, painting, cleaning, assembling new furniture. Sometimes we were joined by generous family members who came along cheerfully to help out. Other times one of us worked alone for the evening in the empty, dimly-lit house, with only an old CD player and the cars rushing past on the street outside for company.

The trouble started before we even moved in. One night during the frantic two week work period, after a particularly heavy rain, I walked down the basement stairs and found a sizable puddle of water pooled on the concrete floor, with more trickling down the cold, gray wall above it. I called Matt with a panicked, sinking feeling, worried that this older home had more "character" than we had bargained for, and knowing that it was too late at that point to turn back. Indeed, the puddle was only the beginning of a veritable flood of unfortunate challenges we would face head-on.

Throughout the tumultuous year and a half we lived in that house, we paid the financial and emotional dues for a multitude of problems, none of which had been hinted at by a home inspection. The basement walls continued to weep during random rainfalls, without any sensible pattern to its frequency or location. The sewer pipe backed up into the laundry room, choked as it was by the roots of the beautiful old trees I had loved in the house's front yard. We suffered through a month-and-a-half long wasp infestation, in which hordes of the aggressive insects filled our bedroom every morning and we drove ourselves crazy trying to find the source of them. (They had a secret nest tucked away in the bedroom walls, in a tiny sub-closet off our main one.) The thick electrical wire that connected the house to the city power source on the street blew down in a storm one day; it lay threatening us from the driveway like a long, charged up snake. The roof started leaking. A few of the windows seized. Mice scurried in the plaster walls behind our bed while we tried to sleep at night. As each new problem surfaced, one after the other, and we paid yet another professional to come and set things right, I continued to work almost zealously on turning the rooms and the garden into the picture-perfect living spaces I had imagined when we first fell in love with the place. I thought if we could just get past whatever the most recent problem was, the house would finally become for us the quaint little family haven we had thought it could be.

The day we realized the chimney was crumbling was the day I finally ran out of energy. I felt that the house, with all of its flaws and demands, had succeeded in its mission to break me. We fixed the chimney, then hammered another For Sale sign into the front lawn and walked away from the house a few months later with great relief. For a long time afterwards, I considered the decision to move into that house a mistake, a choice that in hindsight, we probably never should have made.

I've driven by that old house often in the almost nine years since we moved out of it; it sits on a street that is on the way to many other places I frequent in town. Whether it's because time has dulled just how stressful living there felt for me, or because being away from its walls has given me perspective on its value, I have a different feeling about the house now.

The spirit of imagination the house inspired on first look never left it or me, I now realize; it was present in little signs everywhere even as we struggled to deal with the bigger problems. It was there in the pretty view from Noah's tiny bedroom, where we lined his bed up perfectly so that he could gaze out the window and dream while the sun rose off in the distance. It was there in the friendly neighbours all around us, whose kindnesses added warm colour to our grayest days. It was there in the surprise trilliums that bloomed quietly, beautifully in the side garden every spring, and in the old wood floors that squeaked and thunked genially as we played on them, adding our own lines to the stories already written on the long, golden boards. The house had made us feel something that initially encouraged us to take a giant leap and see what would happen. While living in it didn't turn out how we had envisioned, thinking of that choice as a mistake ignored all of the more complex benefits of our time there. We grew from our experiences in that house; we left there not actually broken, but changed in ways that made us wiser, closer to each other through shared challenges, more appreciative of easy times, more resilient.

Sometimes I glance inside the open front windows of our old house when I pass by it, trying to catch a glimpse of the people who live there now and the way that they're using the rooms we worked so hard to improve. I wonder what secrets the house has held for them that we didn't discover in our time there, what little bits of wisdom they might be gaining. I wonder often if they're happy.

Last week as I drove by the house, I noticed with delight an impressively tall, colourful, intricate structure built out of K'Nex standing in the old living room window; it looked very like something my boys would have built in the days when little bricks and rods and wheels were the chosen canvas for their imaginative endeavors. It's somehow comforting to me that the house seems now to be still what it was for us then, even if we didn't fully appreciate it: a hopeful, if flawed, home, heartily encouraging creativity and growing. 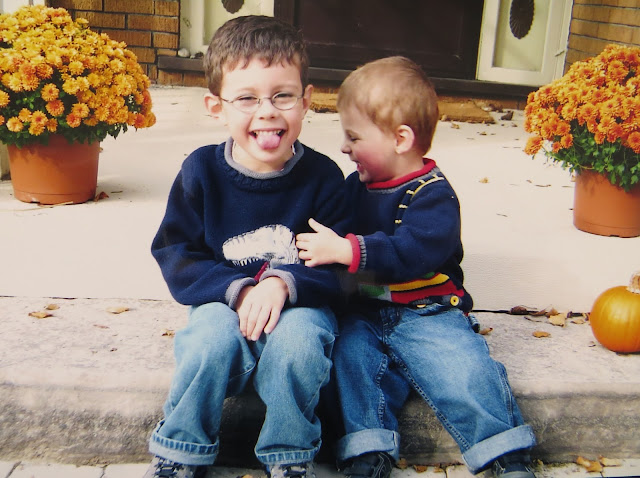