Happy Leap Day! Here we are, at the end of February already. Even with the extra day added on, this month, which has felt very full in all kinds of good ways, seems to have flown right by. I could have written a dozen blog posts detailing the various things we've all been up to in recent weeks, but time for writing has been in short supply, so I'm settling for the fast forward version of chronicling February's more noteworthy moments today.

Matt and I have been especially proud parents this past month, as we've had several exciting opportunities to be observers to the hard work and accomplishments of our boys. I watched Noah compete in the CWOSSA swim meet, where he represented his high school in two events, and Matt and Will and I all attended the much anticipated unveiling ceremony of Team Dave's FIRST robot, an impressive feat of engineering that Noah and his teammates achieved through hours of determined effort over the past several weeks. We missed having Noah around home through most of January and February -- he spent every Saturday and Sunday and many weeknights at the school during the build season, often staying there even for meals, which we parents all took turns providing so the kids could eat together in the school cafeteria and then keep working -- but seeing how excited he is about the robot project, how many new friendships he's developed with teens who share common interests with him, and how much real world learning he's acquired throughout the process has made us so very happy for him. We've been amazed to see what the team's robot is capable of doing, and how confident and knowledgeable these young engineers are when they speak about their project to an admiring crowd. Noah is eagerly awaiting Thursday now, when he and his team will travel to Toronto for their first robotics competition of the season, and Noah will act as one of three team spokespersons as they deliver their presentation to the judges for a chance at the prestigious Chairman's Award. 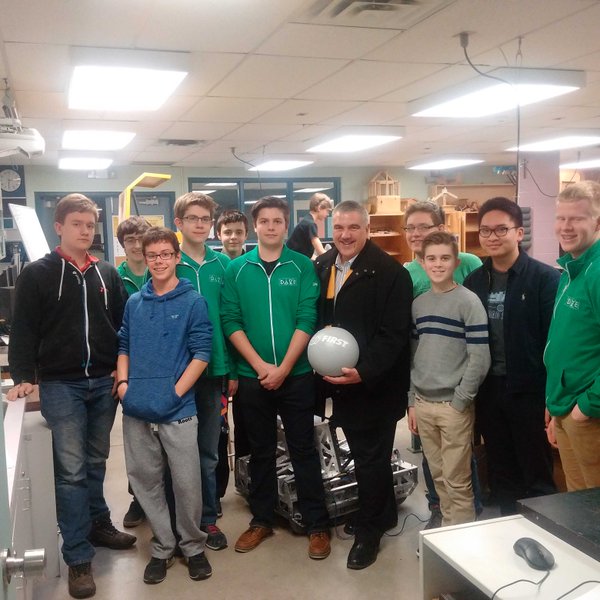 Part of Team Dave with Mayor Dave Jaworsky, who stopped by for a visit one evening. The robot is partially hidden from view on the floor behind him.

Even with all the time and energy Noah devoted to the robotics team throughout these past two months, he still managed to excel on all of his semester one exams, and is confidently keeping up with his semester two course load, including an extra Grade 10 course that he's taking online to free up space in his timetable next year for some higher level courses that really interest him. He continues to faithfully go to crossfit classes and to volunteer as an assistant swim coach every week, too. I admire his drive and focus, and his ability to manage all of these aspects of his life so well.

Will was invited to attend yet another meeting as a student representative; this one was a Town Hall held last week at the board office, led by the Director of Education, who was interested in hearing what students thought about their school experiences. Students were chosen for their passion, commitment, and leadership, and Will was the only Grade 6 student in the small group selected from across the whole board -- all the others were students in Grades 7, 8, or high school. He loved that the meeting was in an official board room, where each student had a little microphone in front of them and a glass of water; these details made him feel very important as he shared his ideas. I'm always so thrilled for Will that he makes such an impression on people (the coordinator of the meeting greeted him with enthusisam when I dropped him off and told us that Will had been highly recommended for this meeting), and that he's using his strong voice for good.

We've been very glad to be able to see Will shine in his dancing recently, too. We watched him perform with his hip hop group at his team's showcase last week, and it was exciting to see through his high energy performance and new tricks how much he's grown since last year. I'm looking forward to watching him compete in the first dance competition of the season on Friday. This past weekend, one of Will's dance teachers encouraged his students to come and check out a dance battle that he was part of at the University of Waterloo on Saturday afternoon, so Matt and I took an eager Will to see what it was all about. It ended up being a high-energy afternoon of great dancing, where university students faced off against each other in the styles Will loves most (popping and locking, breakdancing), but the most thrilling part of it all was that they allowed Will to register as a competitor. Just like that, he got up in front of a crowd of older teens and twenty-somethings and freestyled his heart out against seasoned competitors. I could learn a lesson or two from my adventurous boy about having the courage to live out a dream. 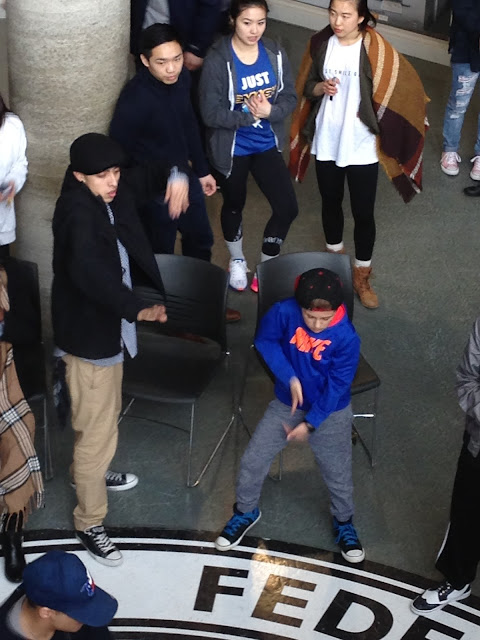 Will freestyling with his dance teacher at U of W on Saturday.

Spending all of this time with young people in recent weeks has felt very inspiring to me. Whether it was teen swimmers, whose hard working bodies created a powerfully loud spray of churning water that sent a thrill of excitement through me as they sprinted down the lanes all together, or dancers, who shared their true selves with touching honesty through their strong and graceful movements, or robotics students, awesome in their ability to generate creative ideas and a well-built machine in response to a real-world problem, or kids with a passion for speaking up to make a difference in their schools, all of them give me feelings of hope and promise as the next generation finds its way in the world.

When we haven't been occupied with the boys' activities this past month, much of our mental energy has been devoted to making a decision about Will's school situation next year. We were invited to attend a meeting with his teachers and principal last week, where they suggested we consider either subject acceleration or a full grade skip for him in September. This has felt like a very weighty issue to both Will and I; we've had many, many discussions in which we've considered all of the pros and cons of each choice. In the end, Will has decided to go with subject acceleration in math, so next year he will be a Grade 7 student but will take math with Grade 8 students, and then he will attend high school for first period each day in Grade 8, just as Noah did. While we all feel that Will is certainly capable of skipping an entire grade, we're respecting his wish to stay and graduate with his friends, so we'll look for creative ways to keep him learning and growing in the other subjects next year, too.

I've carved out a bit of time to focus on learning myself this month, at a writers' workshop series offered by the University of Guelph a couple of weeks ago. The sessions I attended gave me some brand new ideas for writing projects that I hadn't considered before and am quite excited about. I just need to figure out what else I can let go to free up some time to get started....

As if these activities weren't enough, Matt and I also took on some home improvement projects in February. We emptied out both of the boys' closets, removed the ineffective closet organizers that had been in there since we moved into this house over eight years ago, gave the closet interiors a much needed paint job, and installed a more streamlined system for storing clothes and other items. It wasn't an especially thrilling or glamorous task, but both boys are very happy with how much easier the stuff in their closets is to access now. (It's funny sometimes how long we're willing to hold on to something that just isn't working, in a closet or in life, when a bit of work can make a change that improves things dramatically.) Next up is a complete bathroom renovation -- we've chosen the tiles and fixtures and paint colours and the contractor we've hired will be starting on the demolition soon. (Goodbye and good riddance, floor-to-ceiling 1980s ceramic tile!)

Finally, we've been very glad for the mild overall weather we've been graced with this month, which is typically cold and dreary. Matt and I have been able to spend an afternoon outside almost every weekend, walking in our neighbourhood or on a favourite trail through the woods with the warm sun on our faces. The cheerful bit of quiet together out in nature has been a much appreciated gift amid the month's bustle.

I wonder what March will bring. It looks like the new month will come in like a lion tomorrow -- more excitement lies ahead!