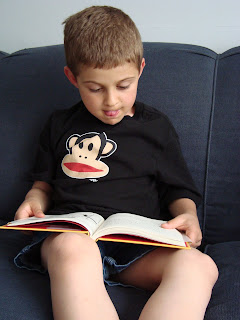 I always like to peek in on my two sleeping boys before I turn in for the night. Seeing them in their sweet slumbering poses (Noah wrapped up tight, cocoon-like, in all of his blankets, with only the top of his head poking out, and Will, completely sprawled out across his bed with no covers on whatsoever) always fills me with a sense of wonder and deep love for these incredible little people. Often when I gently try to cover Will up with his blankets, he'll sit straight up in bed (with eyes still closed because he's not really awake) and he'll mutter interesting things at me. The other night he sort of chuckled out loud and mumbled, "Those books are always SO funny!". He told me the next morning that he'd been dreaming about Captain Underpants, the Dav Pilkey book series by which he's been completely captived lately. You know a book has made an impression on your child when he talks about it even in his sleep!

I personally am not a huge fan of the Captain Underpants books -- all of that potty humour is lost on me somehow -- but children Will's age seem to love them, and that's what's important. Reading experts say that it's not so much what your children read that matters; it's the fact that they're picking up something that engages them so that they will want to read. Comic books, magazines about subjects your child has an interest in, video game manuals, joke books and the like can all encourage reluctant readers to develop their literacy skills (and then hopefully, with their new found enthusiasm for the written word, you can encourage them to branch out in their reading choices).

In today's edition of A bookworm's breakfast, I'll share some wonderful books that have kept my boys' interest in reading going as they've grown.

3-5 year olds: I Am Not Sleepy and I Will Not Go to Bed by Lauren Child

Many people will be familiar with the characters of Charlie and Lola from their television program; the picture books from which they originated are delightful both in written word and in illustration and have immense appeal for young children. In this book, responsible and patient big brother Charlie has been given the task of encouraging his funny little sister Lola to go to bed. Lola's vivid imagination can think of all sorts of reasons why she shouldn't. Little ones will greatly enjoy the silly situations Lola invents and the lively dialogue between brother and sister, making this a bedtime book that will be loved night after night. Child's other books about Charlie and Lola (including I Will Never Not Ever Eat a Tomato and the recent Slightly Invisible) are every bit as wonderful.

6-8 year olds: The Henry and Mudge series by Cynthia Rylant

A perfect set of books for a newly independent reader, the Henry and Mudge series tells honest, funny, and heartwarming tales about a young boy and his beloved 180-pound pet dog. Rylant chooses everyday scenarios that many young school-aged children would be familiar with and writes stories that both entertain and reassure. Whether reading about the day Mudge gets lost, the time Henry and his family build a fantastic castle in their basement on a cold, wet day, or the night Henry and Mudge sleep at Grandma's house, children are sure to feel a connection to Rylant's characters and their adventures. The books' short-story format with simpler sentences makes them just right for newer readers to try on their own.


9-12 year olds: Pendragon, Book One: The Merchant of Death by D.J. MacHale 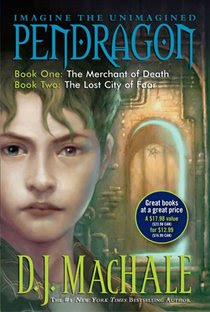 This week's 9-12 year old book recommendation was written by my 9 year old son, Noah, who has always been interested in reading pretty much everything.

Bobby Pendragon is a normal 14 year old kid -- that is, until his uncle Press whisks him away to help save a planet on the other side of the universe. Before entering the flume (a gateway between the planets, or territories, as they are called in the book), Bobby's uncle gets caught in a fight with the evil Saint Dane so Bobby must go through the flume and deal with the quigs alone. This thrilling adventure about Bobby trying to stop two tribes from exploding into war kept me reading way too late, according to my parents.

Everything in this book is very imaginative. The lifestyle MacHale has created in the territory of Denduron is very different from ours, because it hasn't evolved as much as our society, so it felt like I had been transported to another time. The characters are also amazing because they all have very unique personalities. Figgis, the little merchant, for instance, is constantly bobbing around telling people they need to buy this, that, and this. If you're interested in a suspenseful, high-excitement adventure, you will absolutely love this book and the other nine books in the Pendragon series. (Thanks, Noah.)

I hope your children are inspired by whatever they're reading this week and I wish them all good dreams!
Posted by Lisa at 3:36 PM