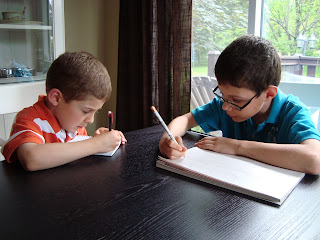 The boys and I were quite busy this past weekend, working on a few last projects for the year that are due soon at school for both of them. I helped Will write about one of his favourite books and fill a decorated bag with objects that would represent the story's events and characters, and I worked with Noah to create an elaborate invitation and menus for a medieval feast and melee hosted by a king. I usually love when the boys ask for my assistance with their creative school work, but this weekend I admit I was feeling a little project-weary. It's been an incredibly busy month so far, we're all anxious for the end of school to arrive, and I found myself looking forward to a long break from any sort of major production.

By Sunday evening, I had come to the conclusion that the end of school will certainly not signify the end of "project" season for the boys (nor for me!). I should have known better than to expect otherwise.

Matt and I took Noah and Will to see the Judy Moody movie this past Saturday. The boys love Megan McDonald's books about Stink (Judy's little brother) and were captivated by Stink's Bigfoot-tracking escapades throughout the very entertaining show. Will, however, was uncharacteristically quiet in the car on the ride home from the theatre. When I finally turned around and asked him what he was thinking about, he looked at me solemnly with his deep brown eyes and said, very confidently, "I am going to find Bigfoot this summer." If you knew Will like I know Will, you would have realized at this point that he was dead serious. I could almost see the wheels spinning madly in his mind as he started to plan out his approach. "I think you should fill the car up with gas on the last day of school, Mom," he said to me in earnest, "because you're going to be driving me all around to look for him." Alrighty, then. I guess I've got my work cut out for me. 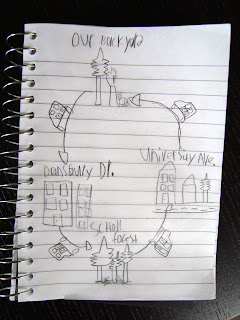 Last night at dinner, the boys started devising ways to earn a little extra cash for themselves over the summer. Now, most entrepreneurial-spirited children will plan to set themselves up a nice little lemonade stand, collect a bit of loose change from passersby, and call it a day. Not Noah and Will. They were getting wildly excited about their brilliant idea for a book about wacky sandwiches that they will write, publish, and sell themselves (and thus be the "first kids to ever write a real cookbook", according to Will). Throughout dinner, the boys brainstormed combinations of ingredients like tomato and lettuce with mini-marshmallows, or ham and cheese with jellybeans. (Oh, the horror! I suppose I should be glad that there was at least some mention of whole-grain bread?) They also came up with a plan to set up a website so that people will be able to submit their own sandwich ideas for the book. You might assume that when kids come up with a concept like this that it's just a passing fancy, that it will get talked about one night at dinner and then never mentioned again, but that's not how my kids work. This morning, they were throwing wild sandwich ideas around again as soon as the sun rose, and Will asked Noah if he had the website up and running yet. I have an uneasy feeling I'll be asked to make a lot of sandwiches this summer.... but at least they've offered to pay me whatever money they earn that doesn't divide evenly between them!!

I see a lot of peanut butter in my very near future, a) because apparently that's a good lure for a Bigfoot, and b) because peanut butter seems to figure prominently as an ingredient in many of these wacky sandwiches I've been hearing about. I've come to understand that in my life with Noah and Will there will forever be some "major production" going on; those boys keep me busy, laughing, and inspired, and I'll always be thankful for that. Another happy truth has become clear to me in the midst of all of their planning and projects, too: no matter what wonderful things Noah and Will decide to do with their lives, they will pursue their goals with creativity and determination. It's obvious nothing will discourage them from realizing their dreams. 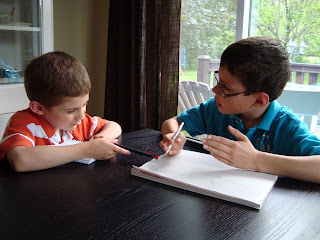