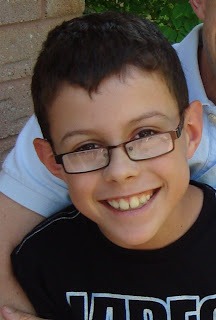 Noah has been wearing glasses since he was two and three-quarters years old. When we first found out he needed them, we worried that such a young boy wouldn't want to keep glasses on his cute little face, but from the moment he first wore them, Noah accepted his new specs (his "sees", as Will called them) and they simply became a part of him, to the point that he never liked to be without them. He looked (and still does look) so handsome in his glasses; they've always seemed just right for him, my wonderfully intelligent and funny boy who has spoken like a little professor almost from the moment he could talk.

It came as a complete shock to me, then, last week, when Noah came downstairs and announced that he wanted to get contact lenses before the school air bands show at the end of the month. (He and his best buddies have been enthusiastically planning and rehearsing a song that they're going to perform in front of the school, complete with instruments and wild coloured hairstyles.) I explained to him that it wasn't quite that simple to accomplish what he was asking (do they even make contact lenses for kids??) and gently questioned him as to why he felt contacts were necessary. My heart gave a sad little thud when he said, "Mom, glasses aren't exactly cool for a rock band." As we talked more about it, it became clear that one of his friends had suggested it might be best if Noah lose the glasses for the show, for appearance's sake. So there it was: proof that my boy has entered the time in his life where a few words from a friend can have a real impact on how he sees himself. Something he has always worn unquestioningly has now become something to be self-conscious about when he looks in the mirror. As parents, we know inevitably this time will come in all of our children's lives, but it doesn't stop us from hurting for them when it does.

Last week, we received news from the school that Noah has been identified as gifted and will be participating in enrichment programming starting next year. While this came as no surprise to us, we (especially Noah) were thrilled with the confirmation of his abilities and with the additional educational opportunities it will provide him with going forward. Being intelligent, creative, and motivated is something on which Noah has always prided himself, and when he got the official test results last Thursday, he came running out of the school to find me, waving the papers in the air and shouting, "Mom! I did it!". It was fantastic to see him so happy about others recognizing his special talents and his potential.

In the midst of all the excitement this past week, though, I can't help but have a nagging little anxiety about Noah's new situation in light of the recent contact lens comment. Will it ever come to the point where some of the kids at school decide being "smart" isn't cool anymore, and will Noah feel pressure to hide his gifts in order to "fit in" better? Will he suddenly become embarrassed to talk about the novel he's working on, the inventions for which he's drawn up plans, or the fact that he asks his mom to find him electronic components to experiment with? I, too, was in an enrichment program when I was his age; I remember the sometimes unkind comments made by classmates who didn't understand what being gifted meant. Could thoughtless remarks make my beautiful boy think he wants to be more like everyone else, "for appearance's sake"? I really, really hope not.

Noah has always been a very confident little man, a leader, a boy who sets high goals for himself and strives passionately to reach them. He has always had a strong sense of who he is and has never been afraid to share himself with the world. I hope as he grows older, he remembers all of this, that he never feels the need to "be" anything other than himself simply to make others happy. The Noah I know just has so much to be proud of exactly as he is.
Posted by Lisa at 1:12 PM