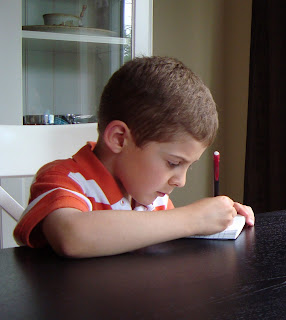 Whenever I see Will silently staring off into space (in those rare moments when he is actually quiet!), I love to wonder what it is he might be thinking about. It's fascinating to see how an imaginative young mind can turn the most ordinary thing into something unique and even magical.

Last evening, I popped into Will's room to give him a last tuck-in as he was turning out his light. He has an interesting habit of leaving some little item on his night table most of the time -- sometimes it's a baseball or hockey card, sometimes it's a Lego man -- and there is always a colourful explanation for why that item can't be put away. Last night I noticed a worn-looking fabric key ring sitting beside Will's bedside clock, one that he had collected at his grandparents' house from a box of old things they weren't using anymore. After a quiet moment, Will said to me, "Do you know why I'm leaving this keychain on my night table?"

Realizing that I could probably never guess the reason in a million years, I asked Will to enlighten me. "It's not actually a keychain," he said. "It's a Chinese good luck charm. But I have to be asleep before midnight for it to work." I told him that was amazing, and asked him what exactly it would do for him. He said that it would give him whatever he wished for (as long, of course, as he was asleep before midnight). When I asked Will if it had brought him any good luck already, he said, "Oh yes. Last night I wished for today to be awesome... and today was awesome."

This old key ring was an item I likely would have just thrown away myself, but Will's new spin on it suddenly made the dull fabric seem shiny and new. I told him I thought I should somehow get myself a Chinese good luck charm, too.

I am always glad to hear Will tell me about happy ideas his busy mind has dreamed up. Sometimes I worry that he understands too much for a boy his age, that he spends too much time thinking about things that he shouldn't know about yet. We have long conversations about unfair child labour practices and the impact of natural disasters when Will expresses deep concern after seeing a headline in the newspaper. Just yesterday, he announced out of the blue at the breakfast table, "I'm pretty certain that the Tooth Fairy is just your mom and dad. Maybe Santa, too." He's only just recently turned seven. Already, though, he has gone through a serious thought process that won't allow him to believe in some of the joys of childhood; for him, things like the Tooth Fairy and Santa simply don't add up logically or practically. It's sad to see your little boy grow up so soon in some ways, while at the same time, he still has the emotional fragility and coping mechanisms of a young child, which don't allow him to handle all of this adult information very well.

When I was in Will's room a little while ago, I noticed that the key chain is no longer on his night table, nor is it anywhere to be found in his room. I'm almost certain there's a seven year old boy at school today with a Chinese good luck charm in his shorts' pocket. I hope it makes his day awesome.
Posted by Lisa at 12:17 PM