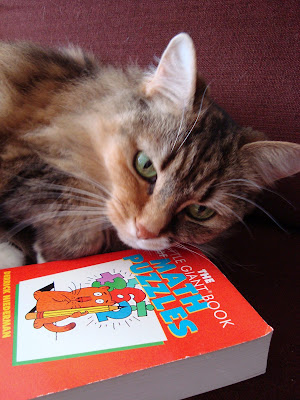 It's the season of standardized testing at school right now, and both Noah and Will's classes are writing the CAT-4 within the next couple of weeks.  What is more interesting, though, is that there is some "cat" testing going on right in our own kitchen every night, as Noah has made it his pet project to teach and quiz our resident feline Maggie about arithmetic.

Noah noticed that Maggie often comes and sits on his bed to keep him company when he's at his desk doing math homework.  He wondered if maybe she was somehow fascinated by the muttering he does when he's figuring out answers to complicated number problems, if maybe there was some yet undiscovered mental potential in that little cat brain of hers that he could nurture and develop.  He started using Maggie's nightly treat time as an opportunity to satisfy his curiosity and to let Maggie in on the joy that a rich intellectual life can bring.

While I found Noah's experiment both funny and intriguing, at first I did not have high hopes for its outcome.  We are talking about a cat who, in 14 years, has been unable to learn that trying to sleep on people's heads at night drives them crazy, or that if you must barf up a hairball, you should do it on a tile floor, and not on a carpet or a duvet.  But Noah is nothing if not patient and determined, and night after night over the past month, he has shaken the bag of Greenies treats, waited for Maggie to come running, and then used the treats to engage and reward her while he instructs and tests her with multiple choice questions on various math facts.  His results so far have been quite impressive -- take a look for yourself!

Noah tells me they have already covered addition, subtraction, multiplication, and division, and that next they'll be moving onto fractions. (He's a very ambitious boy!)  I'm keeping my eye out for the next round of Canada's Got Talent auditions.  Just remember you saw it here first, folks!﻿