Apparently there are some BIG PLANS in the works around here with Mother's Day approaching.  Will, when he's excited about something, has a hard time fully keeping a secret, so over the past two weeks he's randomly announced to me several times that he's going to make me something GREAT, ALL BY HIMSELF, for my special day.  I've been feeling very touched by his sweet thoughtfulness.  When so much of what we do as moms appears to go unnoticed most of the time, it's really wonderful when our kids appreciate us and want to do something meaningful to show us their love.

One morning earlier this week (when I was obviously within earshot), Will was asking Noah if he was making me anything for Mother's Day.  Noah said that he was, but that he wouldn't tell Will about it because I could hear him and it would ruin the surprise.  I got the sense that Will was fishing around for ideas, because he hadn't yet quite figured out what his "something GREAT" was going to be.  I told the boys that in my eyes, a "gift" could be anything sweet or thoughtful or kind that they did, and that while I very much appreciated special handmade gifts they might wrap up and give me, I was just as fond of nice gestures like hugs, or hearing heartfelt words, or sharing happy times with my boys.

After school that same afternoon, Will could barely contain his excitement about a school assembly that was taking place the next morning.  The assembly was going to recognize all of the children (including Will) who had raised money for KidsAbility (a local organization that helps children with special needs) by running in the 3k MudPuppy Chase last Sunday, and the top two fundraisers were going to get to THROW A PIE in their TEACHERS' FACES!!  The thought of this was absolutely glorious to Will, and he kept saying over and over to me, "Mom, you HAVE to come to this assembly!"

Normally, as a stay-at-home parent, I'm easily able to go to these kinds of school functions on short notice.  But this particular assembly was taking place on a school pizza day, and it was scheduled to go almost until lunchtime.  Because Will can't eat the pizza the school orders due to his food sensitivities, on pizza days I usually bake him a pizza he can eat and deliver it, still warm, to his classroom so he won't feel left out.  He really looks forward to that special lunch treat.  There was no way that particular morning for me to be both present at the assembly and make Will his pizza for lunch, too.  I presented this dilemma to Will, and told him that while I would love to come to the assembly, it would mean that he would have to have something other than pizza for lunch.  I left the decision completely in his hands and told him I would do whatever he preferred.  He looked me straight in the eye, and without a moment's hesitation said, "Oh Mom, I want you to come to the assembly."

My son chose me being present at an event that was important to him over one of his absolute favourite foods.  I think he's already given me something GREAT, ALL BY HIMSELF. 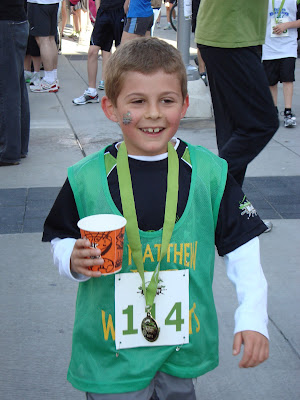