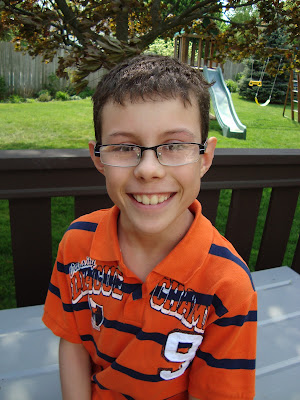 Noah came home from school one day last week without the clothes he was wearing when he left that morning.  (Don't worry -- it's not quite as bad as it sounds.)  He had changed into gym clothes mid-way through the day to train for track and field, left his regular clothes somewhere outside his locked portable classroom, and completely forgot about them because he never changed back into his regular clothes afterwards.  Luckily, someone had brought them inside and he was able to retrieve them the next day, but if you add these items to the goggles and swim fins he left behind at the pool yet again after practices in recent weeks, it seems that my oh-so-intelligent but distracted boy is on another one of his losing streaks.

I have written before about the mountains of stuff Noah has lost, either temporarily or permanently, over the past few years, and you would think that by this point I would be losing my mind with frustration.  But while Noah was really upset and worried when he realized he had forgotten his jeans and favourite t-shirt on an outside step in the school yard, I was thinking of all of the other incredible things he's done with his beautiful mind lately, and I found it easy to forgive him for not focusing on the little details.

A few weeks ago, Noah was one of several students chosen from the grade 5 classes at his school to write the Gauss Math Contest. (I guess all of that math he's been teaching Maggie has been useful to him, too!)  When he came home after writing the contest, he told me that it seemed to go pretty well, and then the subject didn't come up again for awhile.  Last Friday, Noah came out of school at the end of the day with a big grin on his face and very modestly said, "Mom, I came first in the math contest."  I congratulated him excitedly, and told him how wonderful I thought his accomplishment was, really impressed that he had placed first out of all of the bright grade 5 students in his school.

It wasn't until dinnertime, when we were sharing with Matt the details of our day, that Noah clarified he had come first out of all of the bright grade 5 students in the entire school board!  Now, I don't want to seem like a mom who brags endlessly about her brainy boys, but I was filled with such a sense of awe at this discovery that I can't help but share it.  I just take one look at Noah, with his intelligence, his determination, his commitment, and his kind, kind heart, and I'm moved to tears both by who he is and what he is capable of becoming.

It is not simply Noah's math skills that have had this effect on me; it's the fact that lately, everything he puts himself into results in something wonderful that makes my heart swell with pride and love.  He has shown such dedication to his swimming and running in recent months -- we cheered him on wildly as he tirelessly completed a difficult 200 length, two hour swim one recent Saturday morning, and raced to a second place finish in the 1500m at this week's school track meet.  He's demonstrated a great loyalty to his friends and a desire to support them during difficult times, as is evident in the way he just enthusiastically signed up for a hockey skills development camp fundraiser to help his close friend's dad, when he's never played organized hockey a day in his life.  He has shown a capacity to feel and write beautifully from his heart, with this sweet poem he wrote for me for Mother's Day: 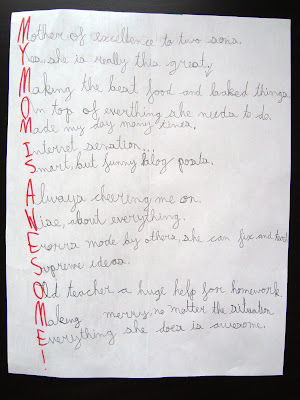 I love that he thinks I'm an internet sensation!  :)﻿

How could I not fall more and more in love with this wonderful boy as each breathtaking new leaf on the tree of his life unfolds before me?

I don't know what other things Noah will lose in the coming months and years; I'm pretty sure I won't be able to keep track of them all.  But Noah makes up for it a million times over in the joy he lets me find every day in knowing him and being his mom.
Posted by Lisa at 3:50 PM