It's the first long weekend of summer already!  The beautiful weather forecast sounds just perfect for the outdoor adventures we have planned at our house over the next few days, and today I was thinking about what kind of cool, delicious treat we could all enjoy together on these warm, sunny afternoons.  The boys and I have had lots of fun in recent summers coming up with fruity homemade popsicles to share, and lately Noah and Will have been asking me if I could come up with a homemade version of a dairy-free fudgesicle.  I wanted something that would taste creamy and chocolately like the store-bought ones, but that would also have some good nutritional value and less refined sugar, so I set off on an internet search for inspiration.

When I came across this recipe for dairy-free chocolate pudding created by Angela Liddon of Oh She Glows, I knew right away that I could make the boys' fudgesicle wishes come true.  The pudding is made from avocado (yes, avocado!), a fruit that is high in fibre, omega-3 fatty acids, potassium, and vitamins and that makes a delightfully smooth and rich pudding base when it is pureed.  I made a few changes to Angela's recipe, poured the pudding into stainless steel popsicle molds, and a few hours later we had some oh-so-good (and better for you) frosty fudge pops! 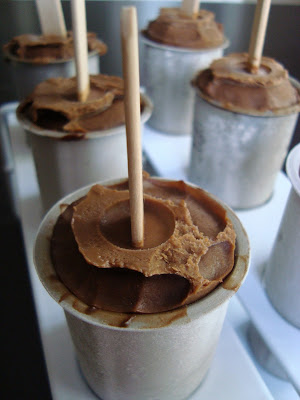 Spoon pudding into popsicle molds and add a popsicle stick to each one.  Place molds in freezer for several hours, or until fudge pops are frozen solid.

I am usually not a mom who plays "sneaky chef" with her kids;  despite the fact that Noah and Will are both quite picky eaters, I continue to put a wide variety of healthy foods in front of them in plain sight daily in the hopes that eventually, they will decide to eat something new.  But I have to admit that I did not tell them what the secret ingredient is in these fudge pops.  They are so opposed to avocados in their green form that I knew they would refuse to try these healthier pops if they knew.  After trying the pudding, though, both boys gave it an enthusiastic "thumbs up" (and I thought it was the best chocolate pudding I've ever tasted!).  My secret is safe until they read this blog post....

I hope you all have a wonderful long weekend!