The neat freak in me gets great satisfaction from having a freshly cleaned house.  While I don't particularly enjoy vacuuming, scrubbing showers, or dusting, once all of the jobs on the list are finished on cleaning day, I feel relaxed and ready for anything.  If only that feeling could last....    When you share your home with two boys who are always doing something, though, a clean house stays that way for less than two minutes!  It seems as fast as Matt and I move through each room putting things in order, the boys are right behind us, scattering crumbs and Lego parts and random objects everywhere they go.  (And if it's not the boys leaving their mark on the house, then it's Maggie the cat, who takes great pleasure in smugly dipping her paws in her drinking water and walking across the kitchen floor immediately after we finish mopping it, leaving a trail of dainty, spiteful paw prints behind her!)

This weekend, a few hours after we had done a complete cleaning of the house, I walked into the boys bathroom and found this: 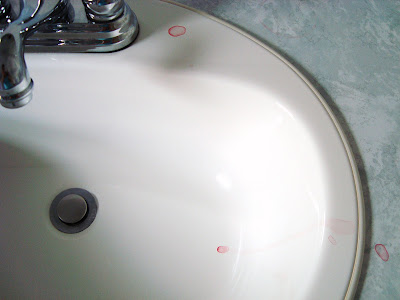 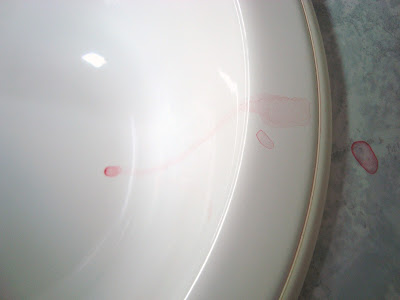 It reminded me of a crime scene in a movie or something (well, fine, maybe that's a little dramatic, but it's close, no?) , and I started playing detective to find out whodunnit.  Will confessed easily; apparently he had spilled some "blood" while he was making "brains" in the bathroom.  I couldn't not be intrigued by this statement, so I asked Will how exactly one would go about making "brains".  He explained at length how he had taken toothpaste-streaked wads of kleenex, crumpled them up, wet them under the tap, squeezed them into brain shapes, coloured them with a red marker, and then repeated the wetting and squeezing steps (which resulted in red oozing all over the place) to get something that looked like this: 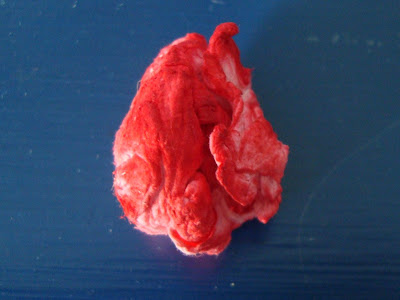 (Do these kinds of things happen in other people's homes?  Because sometimes I really wonder if what we experience around here on a daily basis can be considered within the range of "normal".)

When I suggested to Will that perhaps making brains in the just-cleaned bathroom was not the best use of kleenex, water, and his red marker, he protested, and told me that his work was very important.  He'd been thinking if he made a large collection of brains, he could send them to scientists who study such things, and then they would have lots of specimens to work with when they were trying to discover a cure for brain tumours.

Go right ahead and make more brains, Will.  Your heartfelt "work" has got to be infinitely more satisfying than having a clean bathroom ever could be.
Posted by Lisa at 1:15 PM