The briefs are in the mail

Every day on our walk home from school, I stop at the mailbox down the street from our house to pick up the day's postal delivery.  The boys are always anxious to know if there is anything in the pile for them, and whenever I tell them there is, they always react with enthusiastic "Yes!"s and happy grins.  I don't think, though, that I've ever seen quite the reaction from them that I recently witnessed over one particular piece of mail.

Noah and Will have subscriptions to several different magazines, and this past week they received a new issue of The Hockey News.  I had noticed when I picked up the mail that there was something soft and squishy in the plastic wrapper along with the magazine, but I was preoccupied at the time and didn't give it much thought;  I simply handed the boys their mail once we got inside the house.  Now, normally when The Hockey News arrives, the boys quickly tear off the plastic wrap and toss it aside, and then disappear to study all of the latest stories and stats within the magazine's glossy pages.  This time, though, they were puzzled by the soft, squishy thing instead, and they set the magazine down to investigate further.  I was completely unprepared for the loud hoots of delight and the screeches of disbelief that immediately followed when they realized that inside the plastic wrap was A PAIR OF UNDERWEAR!!! 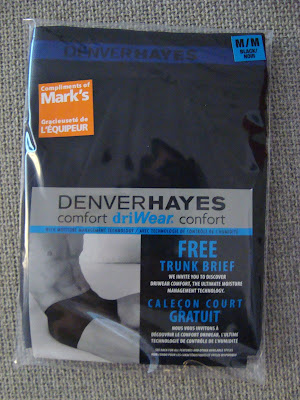 I'm guessing that when the Mark's store decided to advertise their latest style of men's briefs by distributing free samples of them to subscribers of The Hockey News, they did not consider the uproar it would cause in homes all across the country.  It's a pretty sure bet that wherever there were boys around Noah and Will's ages on the day that magazine arrived, there was a scene similar to the one at our house, involving hysterical laughter and wide eyes and shrieks of incredulity.  Noah and Will spent a good ten minutes alternately guffawing and wondering out loud, "WHY would anybody send UNDERWEAR in the MAIL?!?".  The briefs themselves were very unfunny -- they were black, and simple, and more practical-looking than comical, yet for hours, even days afterwards, every time the boys saw the little package of shorts, they would giggle and repeat, "I can't BELIEVE someone sent us UNDERWEAR!!"

Having never been an 8 or a 10 year old boy, I have been trying to understand exactly what the big deal is about this whole magazine/underwear/mail business.  I asked Will if he could tell me why it makes him laugh so much, and he looked at me like I was being ridiculous and said, very dramatically, "MOM -- it's UNDERWEAR!!".  Enough said, I guess.  I have to admit that even I laugh every time I pass by that package now.

If you're ever looking to put a smile on the face of some school-aged boys, just mail them a pair of underwear.  Results are guaranteed.