When Will started attending nursery school two mornings a week at age three, for the first few months he cried every time I brought him to the school playground for drop-off.  And he didn't just cry for a few minutes and then was fine once I had gone and he couldn't see me anymore; he cried sometimes for the entire morning.   More than once I got a call from the school director to come early to pick Will up, because neither she nor I wanted school to be a stressful experience for him.  For months my heart broke and I was filled with anxiety over whether I was doing the right thing every time I said good-bye to him at that playground gate.  I wondered if he would ever feel comfortable in a place where he was surrounded by other children his age and teachers who had lots of wonderful things to share with him.  I wondered how many mornings over how many years Will and I would both cry in sadness and worry and frustration before things became okay for him.... 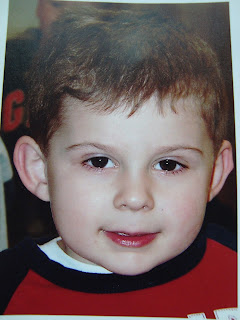 This photo of Will, taken by his nursery school teacher one morning to place above his coat hook for the year, still makes me sad when I see it.  Look at his misty, puffy eyes, sniffly nose, and forlorn little smile.  :(﻿

This story, thankfully, has a very happy ending.  In the years since those early days at nursery school, Will has slowly gained a level of comfort, even confidence, among the students and teachers at his elementary school.  He has a certain charisma and shining little personality that seems to draw people of all ages to him, and when I see him interact so happily with others at school, I'm amazed that this is the same little boy who was once full of tears in a similar environment.  When we walk into the school yard together in the mornings or are headed home at the end of the day, it seems that Will knows almost everyone in the school -- the boys in the senior grades are constantly waving and calling out friendly and enthusiastic, "Hey Will!"s to him, and when I ask him how he even knows these older students, Will replies nonchalantly, "Oh, I just do."

It came to my attention recently that Will has also been chatting it up at recess with the grade seven teacher, who, like Will, is a huge hockey fan.  Last week this teacher told Will that he had arranged for a player from the Montreal Canadiens to come to his classroom on Friday to talk to the grade seven kids and to sign autographs, and he said that he would make sure Will got to join in on this special opportunity, too.  Will told me this excitedly on Thursday, and sure enough, on Friday, when the hockey player arrived at the school, the grade seven teacher sent one of his students to go to Will's classroom and pick him (and only him!) up for the presentation.  Will came home proudly displaying a little Montreal Canadiens towel which was signed specifically for him from his "buddy", Brad Staubitz.  It still astounds me when I think about it, how a little boy in grade two managed to endear himself so well to the grade seven teacher and students that he scored himself the only external invitation to their special event. 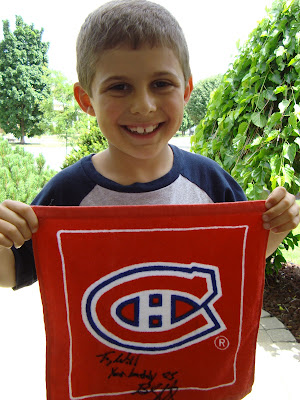 I also had the pleasure of seeing Will peform a dance routine on stage with his class on Friday afternoon, for the school's year end talent show.  He talked about this dance number and how excited he was about it for weeks, and would often give me a "sneak peak" by demonstrating some of his moves.  Admittedly, Will was nervous the morning of -- I saw him staring off into space many times at the breakfast table that day and asked him what he was thinking about, and he told me he was practising the routine in his head because he was worried he might forget the steps -- but when he got up on that stage in front of the whole school, he danced his heart out, and I couldn't take my eyes off him.  He and I were both so incredibly pleased and proud of him.

It is a wonderful thing to realize such a transformation has happened in your child over the years.  It's like watching the sun peek out from behind the clouds after a summer rain, and then feeling your breath catch as a rainbow appears in all its wonder and glory, filling you with happiness.  Keep on shining, Will.  Your vivid and beautiful colours delight us all.