Will has a new friend.  I don't know much about her, except for what her nicely manicured hands look like and how her voice sounds when she speaks in a gentle, guiding tone.  Otherwise, she is pretty much a mystery.  Is this enigmatic friend of Will's imaginary, you ask?  No, the days of companions that Will created in his own mind ended with the quiet, uneventful disappearance of Big Mike many years ago. This new friend is named Suzanne, and she's a real, live person, though she speaks to Will only from the screen of his laptop.  She's Suzanne of the Rainbow Loom instructional videos, and Will is quite taken with her. 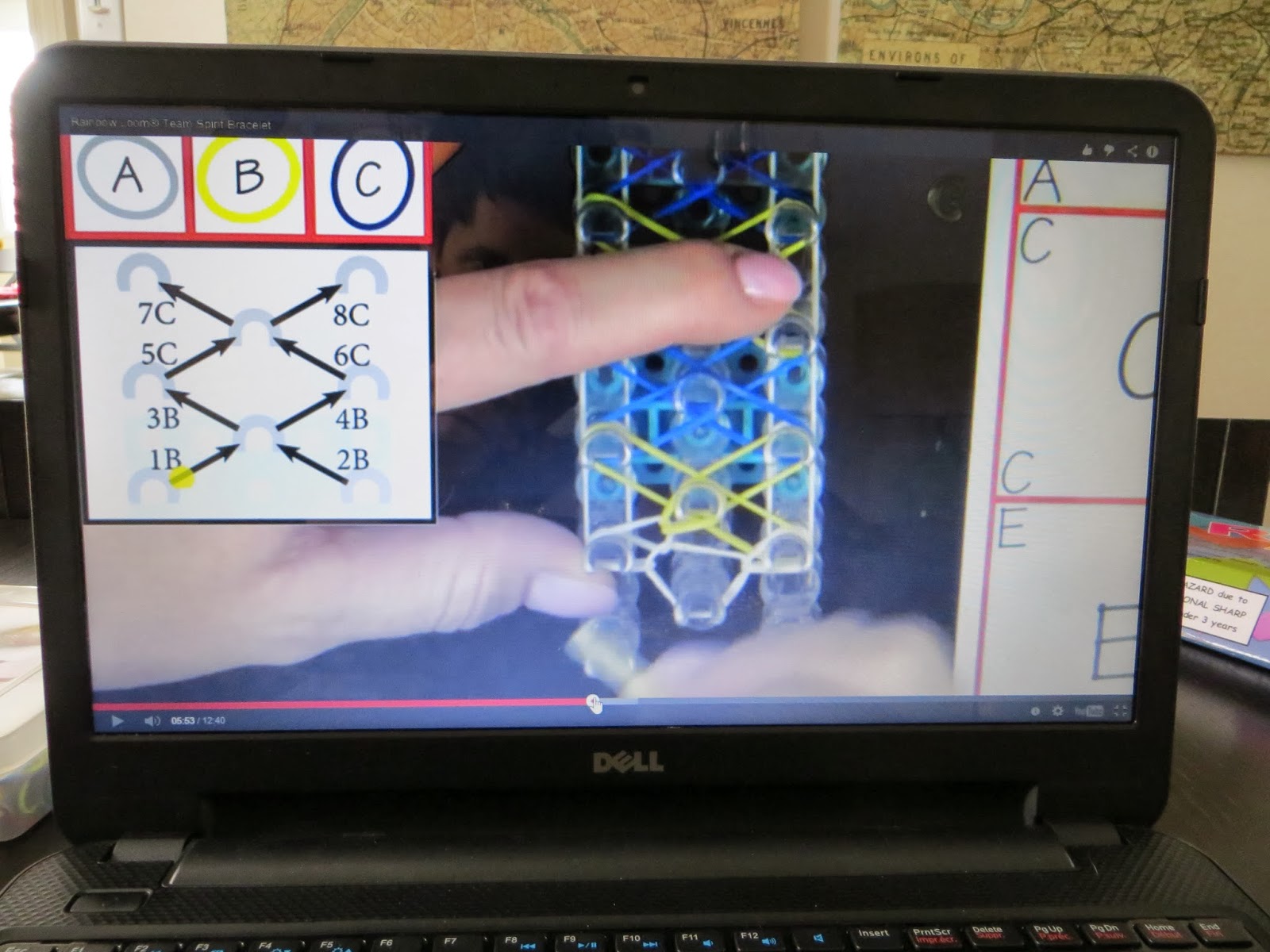 We were late to get into the Rainbow Loom craze in our house.  The thought that either of my boys would be interested in making bracelets out of tiny, multicoloured rubber bands never crossed my mind until one day in late fall, when I saw a tweet from fellow blogger Jeni Marinucci declaring enthusiastically how much her nine year old son was enjoying Rainbow Looming.  I asked Will if he wanted to try it, and he said he did, so I went out and bought a couple of bags of the little elastics as a trial.  We watched a few YouTube videos that showed us how to make some of the easier bracelets using just our fingers or two pencils, and when Will realized how much fun that was, he asked for the Rainbow Loom itself for Christmas so he could commit to the craft more fully.

I know many children who quickly learned to make a basic bracelet style or two on the loom and have since been content to continue making those same bracelets, simply using different combinations of colours to get something new each time.  Will is not one of those children.  Over the past several weeks, he has been confidently working his way through the fifty-one unique and increasingly intricate designs on the Rainbow Loom website, with the same kind of fervent passion he devotes to anything new and challenging that fascinates him.  With the help of Suzanne's step-by-step video tutorials, Will is on his way to becoming as much of a Rainbow Loom expert as she is. 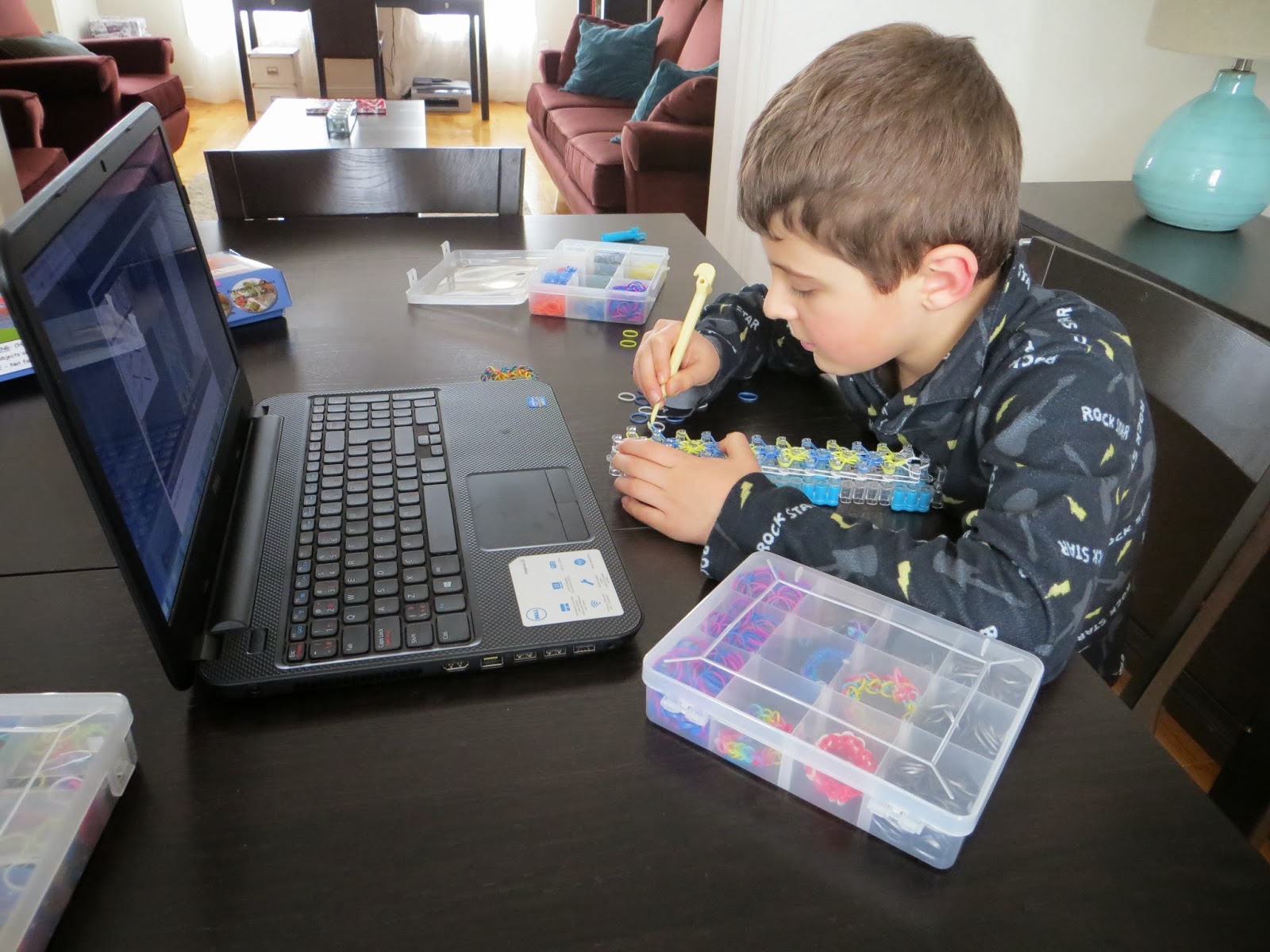 Will spends a good part of his weekend days and weekday evenings at the dining room table now, chatting with Suzanne as he carefully watches the images of her hands on his laptop screen and then focuses intently on his own loom and the elastics in front of him.  He questions her rhetorically when he misses an instruction ("What exactly do you MEAN, Suzanne?), updates me periodically on what she is teaching him ("Suzanne says I should hook this band over to make a tear drop shape."), and gloats triumphantly when he grasps a bracelet design so quickly that he actually gets ahead of Suzanne's instructions on the video (Hurry UP, Suzanne!  I've already done that.  What are you WAITING for?").  Will is so comfortable with Suzanne now and speaks of her so familiarly that I keep expecting to see a woman actually sitting at the table with him whenever I glance into the dining room.

Sometimes I want to curse Suzanne for posting her happy little instructional videos from afar, and then being conspicuously absent when my young perfectionist makes a mistake and is reduced to a pile of frustrated tears with a mess of separated rubber bands scattered in front of him.  (Where are you NOW, Suzanne?)  Mostly, though, I just want to hug her for helping me so completely occupy my creative boy who is happiest when his mind and hands are busy making something wonderful to him. 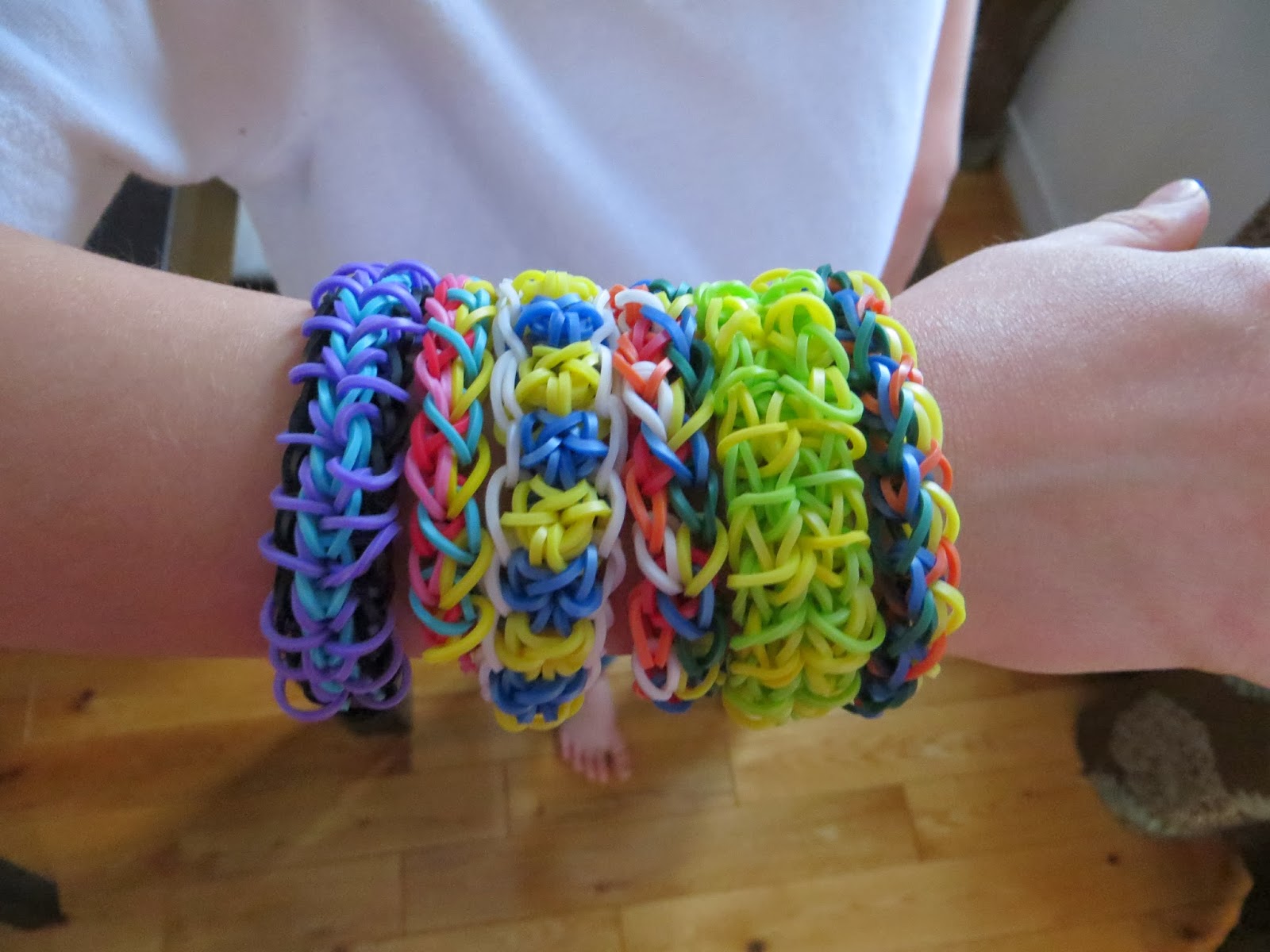 Now if only Suzanne would make an instructional video with a step-by-step plan for cleaning a bedroom....
Posted by Lisa at 5:08 PM