The afternoon sun streams through the front windows, making the space where I usually sit and write feel bright, warm, inviting.  There is silence in the room, save for the sound of the letter keys clicking in irregular rhythms and the persistent, almost palpable hum of mental activity happening behind three sets of eyes.  I have company today; the boys' fingers have joined mine in the act of tapping out strings of words.  Noah is putting the finishing touches on a piece of fiction he's decided to write for a contest, and Will is working on an article for his school newspaper.  I'm thrilled that the two of them are already finding their own voices and have the confidence to let them be heard.

Back in September, I was feeling disappointed when I was unable to find a teacher willing to help coach a First Lego League team at Noah and Will's school this year.  Although I understood and respected the teachers' reasons for declining (the role of coach for this activity requires an enormous amount of time and energy), it seemed a shame for the boys and their team not to be able to build on the excellent learning opportunities that the FLL project had provided for them last season. I wondered if Noah and Will's enthusiasm for school might lag this year without the challenge of robotics to keep them motivated and engaged.

I'm glad to say that I'm not worried any longer.  It seems both boys have considered the lack of a school robotics team not as a barrier to their growth, but as an opportunity to see what else is out there (and inside themselves) to explore.  Will has come home with a beaming face and stories of how he has been taken under the wing of the senior boy at school who runs the tech team; he is learning the ins and outs of setting up and managing the sound and light and video systems for school assemblies and special events, and he now gets to sit at the tech table in the gym, behind the controls. He is taking his strong interest in politics to his new job as a school newspaper reporter, and has come up with an earnest plan to interview the new Waterloo mayor so he can craft an impressive article for the next issue.  He's also writing an international math contest next month, a challenge he gleefully accepted when he was recently approached by his teachers about participating. Will's mind is so full of compelling ideas and intentions these days that he sometimes finds it hard to fall asleep at night.

Noah has mapped out lofty goals for his future this year in grade eight, and he seems to have a new spark and confidence in seeking out what he needs to reach them.  I think his academic success and positive social interactions in his high school class so far this fall have shown him that following an uncommon path can bring him a great deal of happiness. It's wonderful to see him working together with his teachers to create the unique and rewarding educational experience he craves. At home, he spends weekend afternoons dismantling all of the intricate components of my old netbook computer with a tiny screwdriver, and chatting with his electrical engineer uncle about how he could use these parts in an interesting new project. The boy who used to doodle in the margins of his math notebooks out of frustrated boredom now tackles the optional extra challenge questions his high school math teacher assigns with a positive, inquisitive mind in the evenings, and he has hopes of attending a four day enrichment studies unit at Queen's University next spring. When I compliment Noah on his excellent attitude and hard work, he looks at me and says knowingly, "I have plans, Mom." We both understand, without any further words, that he is going to do everything in his power to see what he's dreaming of come to life. 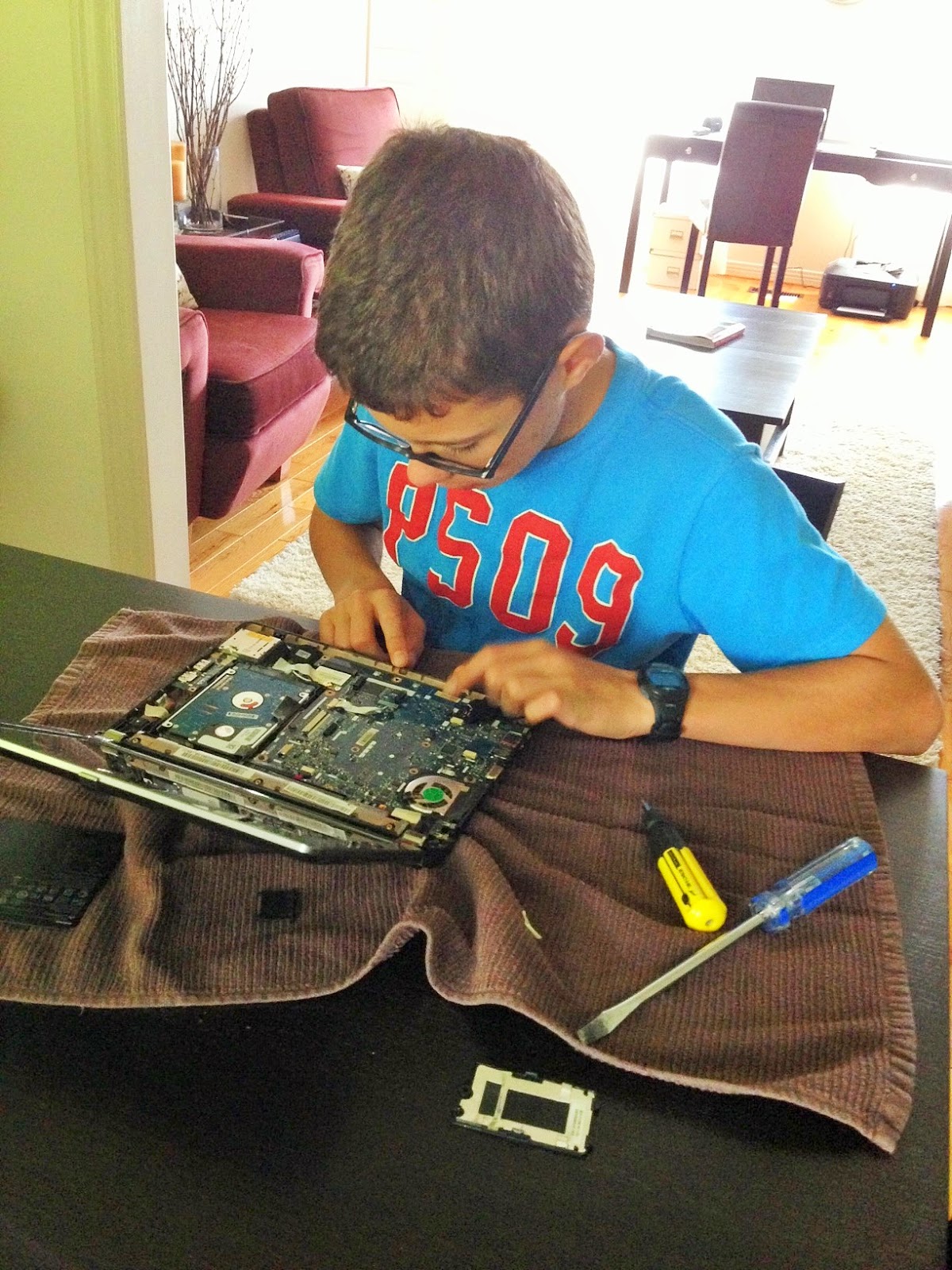 It has been challenging sometimes to find the kinds of educational experiences the boys have needed over the years to keep their curious, always moving minds happy.  Sometimes opportunity knocks, but sometimes you have to go out and find it, or even create it yourself.   I see Noah and Will doing all of these wonderful things this year that animate them and fill their hearts with joy, and I realize that my efforts in advocating for and encouraging them have helped them learn how to recognize and seize opportunity for themselves.  That's a pretty amazing feeling for all of us.