"What should I do with the leftover turkey?"

If you're still looking for an answer to this question after Monday's Canadian Thanksgiving celebrations, I have a delicious recipe for you today. This is one of my family's favourite ways to use up the leftovers once we've grown tired of the usual plate filled with carved turkey, cranberries, sweet potato casserole, and vegetables: individual pot pies nestled in a rich almond flour crust.  These warm, filling pies really hit the spot at the end of a busy fall day, and have won over even my two very particular eaters. 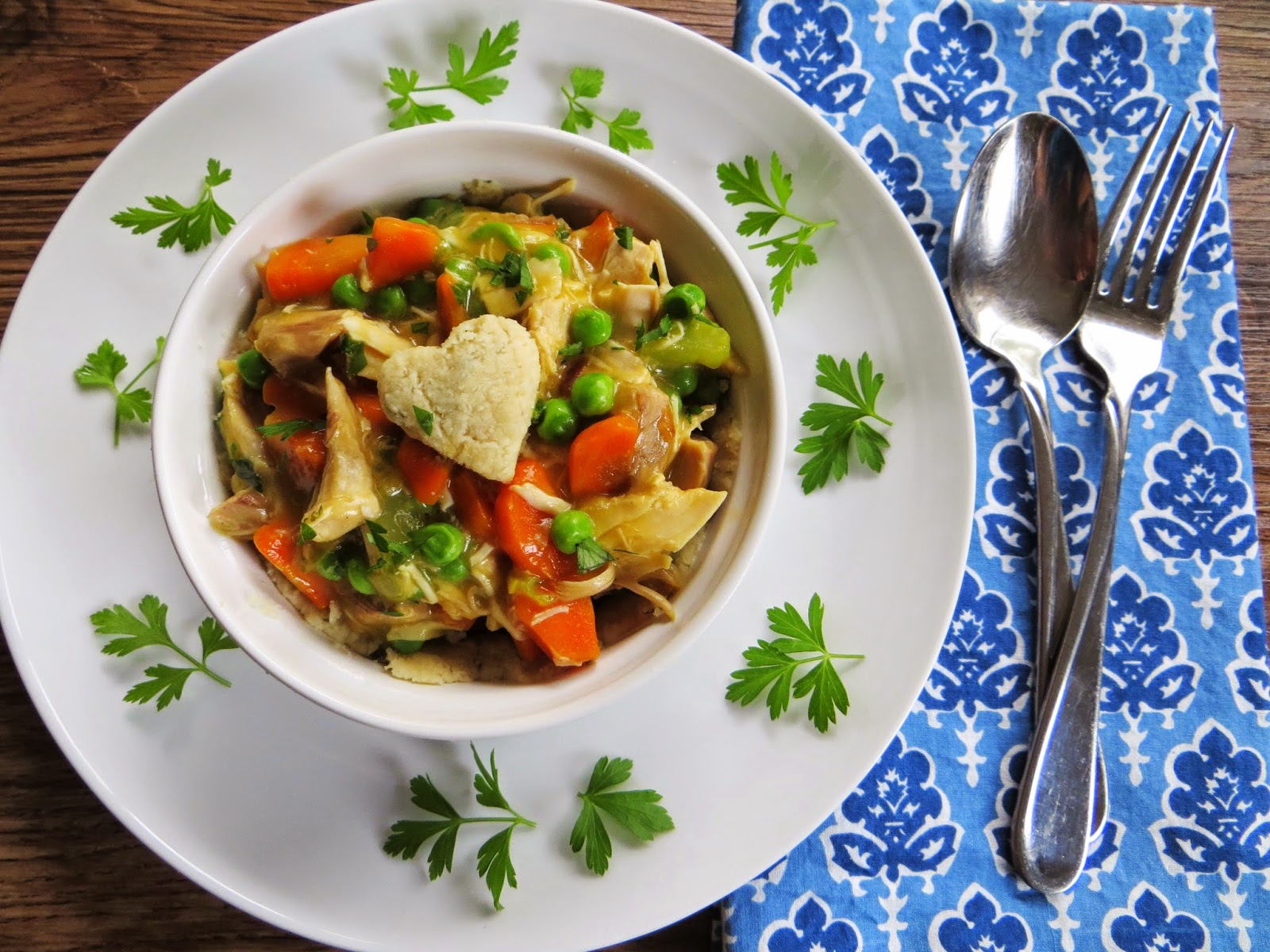 Preheat the oven to 350 F. To make the crust, combine the almond flour, sea salt, baking soda, and parsley in a mixing bowl. Whisk together the grapeseed oil and water, and add them to the dry ingredients.  Stir until a uniform mixture forms.

Set aside approximately two tablespoons of the almond flour dough, then divide the remaining dough between four ramekins.  (You could use a 9-inch pie plate instead if you prefer to make one larger pie rather than four individual ones.) Press the dough firmly into the bottom and up the sides of each ramekin to form a crust. Flatten out the dough you set aside to half-inch thickness, and cut out four decorative shapes using a small cookie cutter.  Place the ramekins and the cut-outs on a parchment paper lined baking sheet. Bake in the preheated oven for 15 minutes.  Remove the crusts from the oven and let them cool.

To make the filling, heat the olive oil in a large skillet over medium-high heat.  Add the onion, celery, carrots and sea salt and stir.  Reduce the heat to medium; cover the skillet and cook the vegetables for approximately 10 minutes, or until they are soft, stirring occasionally.

Stir in the cooked turkey, peas, and parsley and heat until the turkey and peas are warmed through. Season the mixture with pepper, to taste.

In a small bowl, whisk the arrowroot flour into the stock until it dissolves.  Turn the heat under the skillet up to high and add the stock mixture to the turkey and vegetables, stirring constantly for about a minute, until it thickens to a gravy-like consistency.

Spoon the filling into the ramekins, and place a baked decorative cut-out on top of each one.  Garnish with a sprinkling of finely chopped fresh parsley and serve hot.

If your turkey leftovers are already long gone, these pot pies are just as delicious when they are made with leftover roast chicken instead.  Either version makes for very satisfying comfort food when the weather is chilly.