It was back to school for the boys this morning after a really enjoyable week of March Break fun and relaxation.  As I drove back home from my first of two morning runs to the high school, I was thinking about Noah's experiences there so far this school year, and how they've had such a positive impact on his life. It's hard to imagine that just over a year ago we were nervously and excitedly weighing the pros and cons of having him start high school courses a year early; now it seems like the choice he made was the only one that would have made sense for him.  People often voice concerns about acceleration for gifted learners, believing that it's best to keep students with their same age peers in a school setting. In Noah's case, though, we've found that a more flexible educational model has resulted in more engagement, learning, and personal satisfaction for him than a traditional school year ever has.

I could tell you about how wonderful it's been to watch Noah grow in so many different directions this year, about how he's gained confidence and reignited his spark for learning by taking on new challenges, about how he's learning how to work hard to achieve success.  But I think it's more important that Noah shares his experience and feelings in his own voice.  Perhaps hearing from a young person that acceleration can work very well will encourage other students who are considering similar paths, as well as parents and educators who are helping exceptional children find the places where they fit best.

Take it away, Noah.

If the title or anything my mom may have written above didn't allude enough to the author or content of this post, this is me (Noah) guest posting about my experience of accelerating in math and English to eventually be a grade 8 student in a high school setting. And although it seems like this probably only started last year or so, it goes back quite a bit farther.

Flash back to 2012. I was in a grade 5/6 split as a grade 5 student. Unbeknownst to me, this would become my first acceleration opportunity. I was one of six grade fives in the class, and most of us were highly able or gifted students. As a result, the excellent teacher we had that year gave us most of the grade 6 work, only pulling us out occasionally to give us a quick review of the grade 5 curriculum requirements, so that we would have that knowledge. The year was one of my best because of mental stimulation, which for me leads directly to happiness, and despite being somewhat isolated from most other peers my age (we were in the lone portable), I felt like I still had very good social interactions. Some relationships still stand strong today, even if those people have moved to a different school or even a different city.

I finished the year feeling great. I was confident, eager, excited, you name it. So as the next school year came, and I found out that I was in a very good grade 6 class, with the same teacher as the year before, my hopes swelled. I started the year excited -- but as it progressed, I could just feel myself shutting down. Despite the teacher's best efforts, nothing ever really happened to fulfill my academic needs. I came to strongly dislike school, math in particular, as it was (in my opinion) unnecessarily repetitive, which is one of the biggest pet peeves of many gifted students. I remember actually being bored to tears one day.

I sank into a sort of conscious hibernation. Nothing really mattered anymore. My optimistic self degraded to a pessimistic stick-in-the-mud, and I was often moody. My introverted personality showed strongly, and I would stay in my room with books and music after school, only coming out when needed.

My concern for my academic future only continued through the summer and into the next year. We had identified lack of mental stimulation to be the cause of my descent, and I did not have high hopes for the year. So when my school year began with a temporary teacher whose idea of how to deal with highly able students was just to tell them to read a book,  I sank even further.

There was some uncertainty in the first week of school about who the permanent teacher for my class was going to be and I needed someone I could work with to fulfill my academic potential. My parents and I were seriously considering pulling me out of school completely and joining the growing movement of unschooling. I had seen a Ted Talk on it and the concept intrigued me. The only thing that stopped me from completely jumping on that idea was that I would be missing the social aspect of school. All the same, I remember being in the shower (my big-time thinking place) and composing long, thought-out letters on the topic of me leaving to anyone who would be affected.

We decided to stick it out for a little bit. If things didn't get better soon, we were going to pursue an alternate education plan for me. On the Friday of the first week, I walked into the classroom to find a young man sitting at the computer desk in jeans and a golf shirt, sipping a coffee while looking at a document. Once the whole class had settled in, he stood up and introduced himself as our teacher for the year. Finally, some stability! From there on in, things looked up. This teacher was charismatic, came up with intriguing assignments, and had no problem challenging highly able students.  Despite this improvement, at times I still felt it wasn't enough.  At the suggestion of the itinerant teacher of the gifted, my parents and I entertained the possibility of me accelerating through grade 7 and 8 math (like I said earlier, the least stimulating subject for me) that school year and then going on to take two high school credits in my grade 8 year. After much thought (I was still lacking confidence about a lot of things, and I was particularly anxious of the social impact on me, being with kids a year older than me for a period a day) we decided to go for it. We organized a meeting with everyone involved to discuss how it would work.

The rest of that school year passed in a blur. I was happy, stimulated, and more confident than I had been in years, because I could work more independently and set my own pace for learning. As summer vacation came and went, I became increasingly excited, but also increasingly nervous. Not only was I going to high school (!), but I was going a year early, and so I was unsure of how I would be socially accepted.

The first day came and went. Everything went perfectly fine. Then a week passed. Then a month. Before I knew it, it was exam time, and I was fitting in like a round peg in that ever-troubling round hole. As for the academic perspective, it was even more than I could have asked for. The teacher himself was intelligent and hilarious (I mean, drawing pictures of blasting yaks off a scale to illustrate a concept of algebra?!), and he pushed us with side assignments that would stretch our minds further. The material itself was challenging but to the right amount -- it required thought, but I could figure it out with little frustration.
I really began loving this 75 minute block of time, and honestly looked forward to it every day. With a determination I hadn't had in years, I worked harder than ever and managed to land myself a mid 90s mark for my final grade. I am currently taking grade 9 English, and enjoying everything about it just as much.

In conclusion, I am extremely satisfied with how the acceleration has played out so far. As a bonus, I've opened up two more course slots for my later years, something that is very useful for pursuing special interest courses, or taking university courses in my senior year. Plus, I've gained confidence I've never had before, the most recent test of it being entering a speech contest, something that would have mortified me a year earlier. I've made some great friends, including a few of us who gravitate to each other for group work. And I know this is going to sound really cliché, but seriously, I'm the happiest I've ever been. 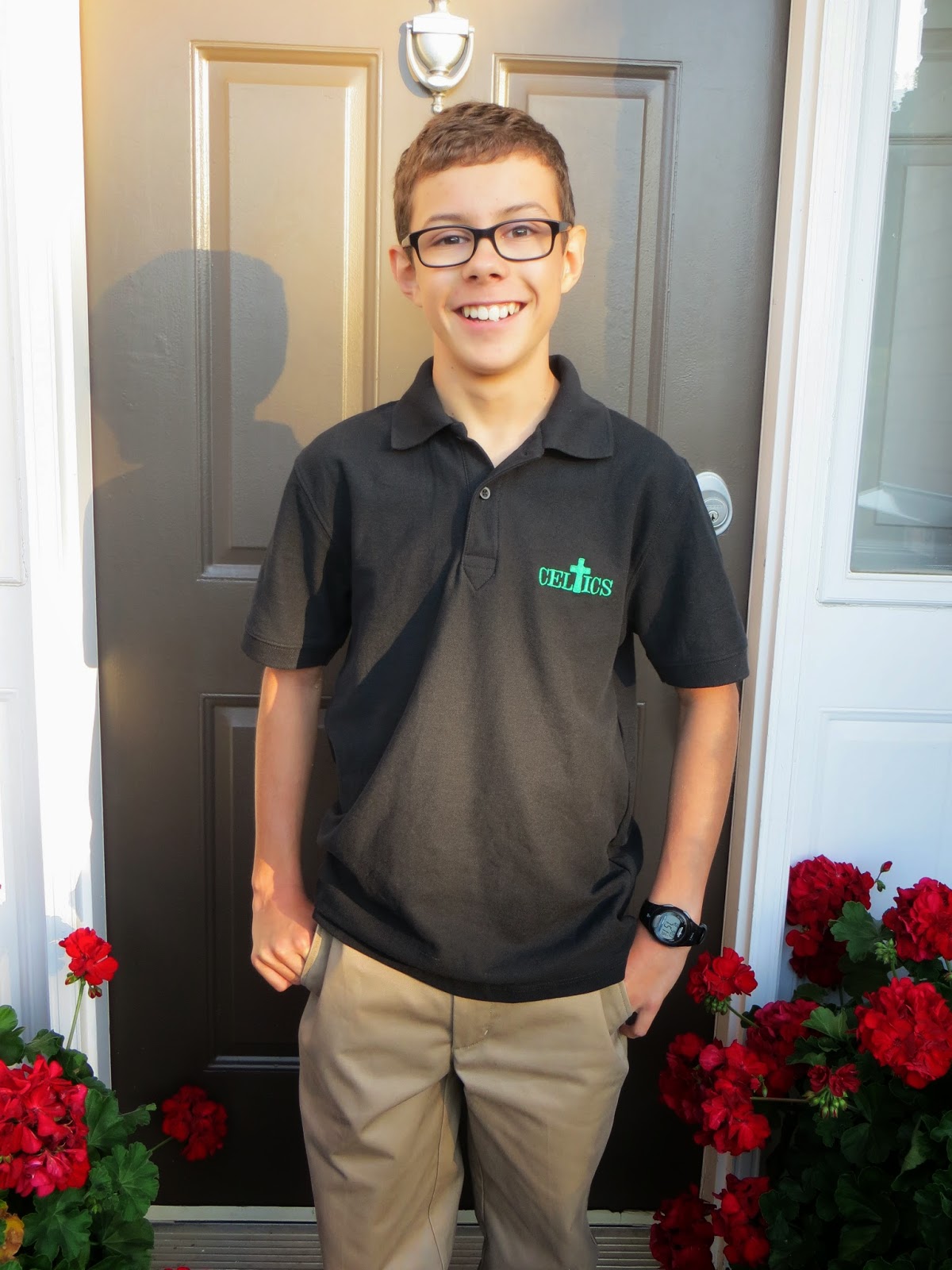 This post is part of Hoagies' Gifted Education Page's Blog Hop for March.  The blog hop shares various bloggers' perspectives on a different topic related to giftedness each month.  If you are looking for information to help you support a gifted learner in your life, Hoagies' Facebook Page regularly provides helpful resources, interesting news, and discussions on all aspects of giftedness. 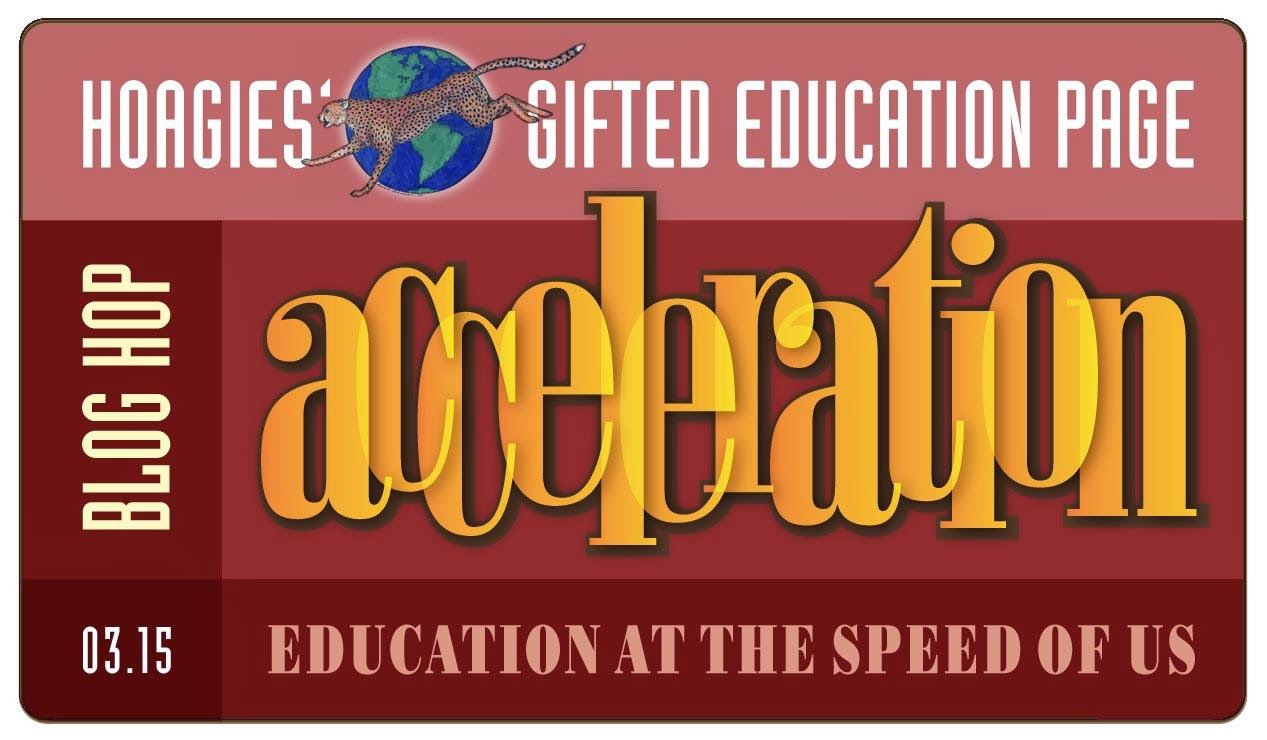