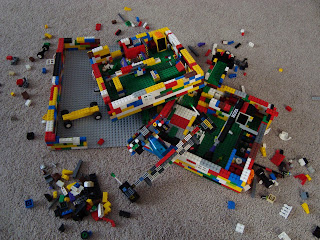 People who know me will likely agree that I've always been very organized, tidy, and efficient in life. The little perfectionist inside me works hard at and gets great satisfaction from keeping everything nicely under control. I'm forever a woman of lists and calendars that help me make sure everything gets done when it should. I accomplish dozens of things in a day, having mastered the fine art of baking muffins while simultaneously shopping, dusting, and writing a blog post. Everything in my home has a place of its own; even the three colours of dishes currently in the kitchen cupboards are stacked in a particular pattern (and I get all twitchy if a rogue plate ends up out of order). I've gone through four Swiffer Sweep'n'Vacs in as many years, because crumbs left on the floor put me in an unpleasant state of agitation. That's neurotic, you say? Definitely. But creating a sense that life is structured and orderly is what feels comfortable, safe, and right to me.

Having children, however, has forced to me to realize that there are simply some things that are beyond my control. I now share a life with two boys who, in some ways, are the antithesis to organized, tidy, and efficient. Whereas I prefer a pristine and uncluttered desk as an optimal workspace, Noah prefers a desk that looks like this: 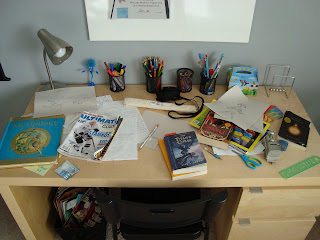 Though I feel best when everyone is wearing freshly laundered and ironed jeans, Will is much happier in pants that look like this: 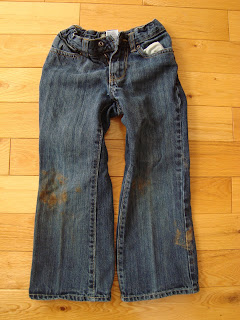 I often feel pressure to get the boys to "hurry up" so we're not late for something; they like to take their time, stopping to sing crazy songs in their underwear instead of getting dressed in the morning, or collecting and studying things along the road instead of walking purposefully to their destination.

The boys baffle me with the ever-growing pile of random Lego parts that they have going beside the family room couch, even though I've provided them with storage boxes to keep it all in. I scratch my head when a child who can explain how a rainbow is made repeatedly demonstrates a brain blip about colour sorting, throwing his white t-shirts into the laundry basket for dark clothes (if his clothes make it to the laundry basket at all). Admittedly, the path of clutter and chaos the boys continuously leave in their wake has left me hyperventilating or fuming on more than one occasion. I've often wondered where I've gone wrong in communicating to them the bliss that an ordered life brings.

Over the past several years, I have come to the realization that the nicely organized, tidy, scheduled life is my idea of perfect, not theirs. I try sometimes now to relax a little when I see the haphazard piles of books scattered about their rooms, or the mountains of "treasures" they've accumulated in their closets, because I've seen that our world doesn't actually fall apart when some part of it is disordered.

I'm not kidding myself: I still prefer most of life to fall neatly into place at my coaxing, and I continue to believe that planning, organizing, and tidying are important skills for the boys to learn. But in their sometimes scattered, silly, spontaneous ways, they've shown me that there can be joy in messes, too. My latest Swiffer vacuum has lasted much longer than my previous ones because it doesn't get used quite so much, and I've traded some of my schedules in for fly-by-the-seat-of-my-pants family adventures. I'll also admit something shocking: the other night after dinner I got muddy jeans playing soccer with the boys... and I liked it.
Posted by Lisa at 8:42 AM