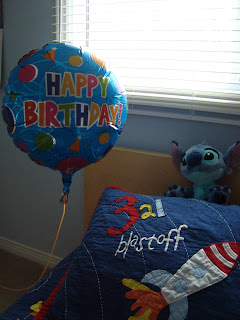 When Will celebrated his birthday with a party at our house almost a month ago, one of his little friends brought him a helium-filled foil balloon brightly decorated with the words "Happy Birthday". It was a very thoughtful gesture, and one that put a big grin on Will's face. For several days afterwards, Will could often be seen in the company of this balloon. He carried it with him from room to room, invented games he could use it in, and even parked it by his bed to sleep, where it hovered quietly next to him like a faithful friend, waiting patiently for him to wake up and play again the next morning. It was sweet to see how much joy this simple object brought him.

A week or so into the life of this balloon, however, it began to cause some problems. One night Will woke me at around 2 a.m. to tell me he heard a scratching noise in his room. He said it appeared to be coming from behind his nighttable, and he was worried that the cat might be doing something back there (which was impossible, since Will sleeps with his door closed specifically to keep the cat out). When I went to investigate, I found the balloon bobbing up and down near the heating vent. The warm air blowing up from the register was causing the balloon to scrape gently against the wall. I moved the balloon out of his room, and with the strange sound mystery solved, Will settled back to sleep. Shortly after that, the balloon seemed to disappear for awhile, and I forgot all about it.

Some days later, I was putting some clean clothes away in Will's room, and I was completely startled when I absent-mindedly opened his closet door and the balloon sprung out at me! I'm not sure how it got there (Will claims he had nothing to do with it!?) but it was starting to seem to me that this balloon had a life of its own. 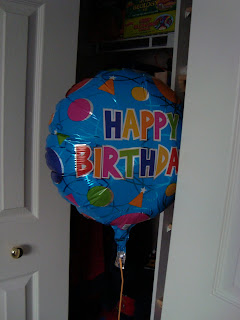 Several weeks have passed since then, and while the balloon is beginning to look like a limp, wet noodle, sagging forlornly as it hovers close to the ground, it still has an unnerving way of showing up almost everywhere I go. When I look behind me after coming upstairs from the basement, the balloon is there, bobbing slowly and silently at the top of the landing. 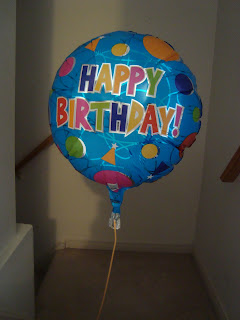 When I walk past the family room, there is the balloon, half peering out at me from behind the bookshelves. 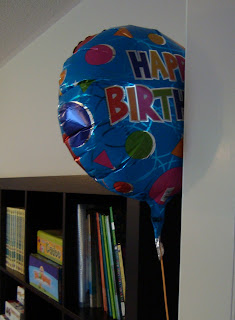 When I head upstairs to turn in at the end of the day, the balloon floats eerily beside my bed, unsettling me with its shiny quietness. 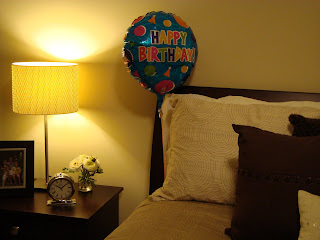 (I'm pretty sure there are two mischievous, grinning boys behind the balloon's location in this case, but who knows for certain?)

I don't have the heart to dispose of the balloon as long as it's still showing signs of life, but I'm starting to wonder how much longer I'm going to have to endure its moping, pervasive presence. I never guessed when Will received a nice balloon for his birthday that it would become the gift that keeps on giving (me the creeps)! 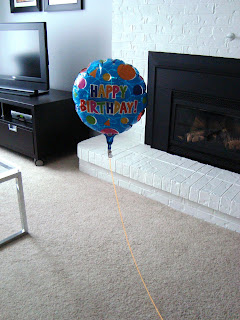