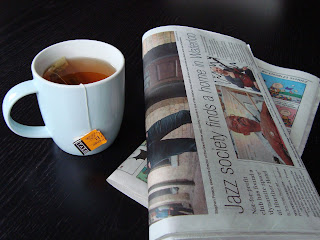 For many people, Saturday morning is a welcome reprieve from the mad dash undertaken every one of the previous five mornings of the week. There might be time on Saturday for sleeping in, for a leisurely cup of tea or coffee enjoyed while poring over the newspaper, for some puttering about in the kitchen in pyjamas late morning to make a decadent breakfast to savour. That is not at all what Saturday mornings are like in our house.

This morning's wake up call came at 5:30am, when a bright-eyed Will appeared in our room asking for someone to get him a drink. He went back to bed afterwards, but not to sleep, and by 6:30 Noah was awake too. Being up that early on a Saturday gives the boys' vivid imaginations plenty of time to devise a "plan" to execute; by 7:00am they were busy gathering supplies and making preparations to stage a dramatic re-enactment of Disney's Fastasmic! using toys, laser lights, and craft supplies.

It's pointless to continue trying to sleep while a production of this scale is being undertaken in your house, so Matt and I were also up early and able to watch the boys' creation unfold. First Will showed up in the kitchen looking like an odd sort of ninja, dressed head to toe in dark colours so he wouldn't be visible as he made various objects move in the show. 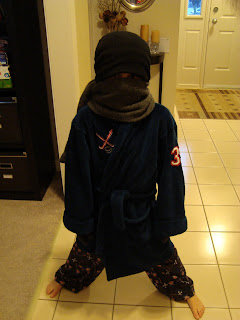 Then I heard Noah thinking aloud about needing more darkness in his room; when I went upstairs, he proudly showed me what he had rigged up using a blanket and his and Will's housecoats to block out as much light from the window as possible. 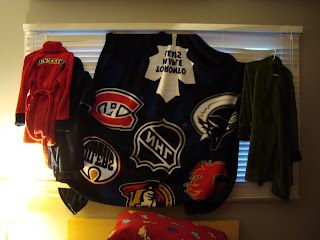 (Yes, those are the boys' housecoats hanging from the blinds.)

After that, the boys closed themselves behind the door to Noah's bedroom, and the top secret staging of the entire grand production began. Realizing we had an entire gloomy, rainy Saturday morning with the boys likely being occupied for hours, Matt and I took advantage of a good opportunity to do some much-needed and long-put-off painting in the basement. When we were finally allowed to witness the boys' finished project, it was quite a sight to behold. The forces of Good (green army men, knights, and robots) were poised to defeat Evil (dragons and snakes) in an epic battle dramatically lit by multicoloured lasers. 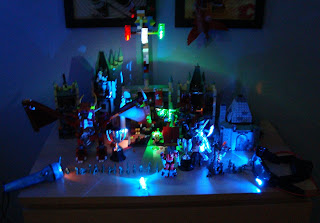 Noah and Will had also created an impressive five minute video of the scene, complete with sound effects from Will's electronic keyboard and a soundtrack of Europe's The Final Countdown from Noah's MP3 player. It was certainly a lot of activity and excitement for a Saturday morning.

Once upon a time, long ago, Matt and I used to sleep in until 9am on Saturday mornings. We'd have a leisurely cup of something warm while reading the paper, and we'd linger over a breakfast of pancakes or french toast before heading out for an afternoon of unhurried Saturday shopping. You know what, though? Once you've had a few weekend mornings filled with ninjas, dragons, and housecoats hanging from the blinds, sleeping in seems overrated.
Posted by Lisa at 1:07 PM