Her little heart began pounding furiously and she felt dread falling like a weighty stone in the pit of her stomach when she saw the bags packed at the front door.  "They're leaving," she thought.  "Whatever will become of me?"  But when the bags left the house in the hands of only The Man and The Bigger Boy, her despair was replaced with a fierce glimmer of hope.

Matt and Noah left yesterday afternoon to travel to Oshawa for the First Lego League provincial championship competition.  It felt strange watching Noah head off on such a big, exciting adventure without me, but we had decided as a family it would be in everyone's best interest to spare Will the twelve-hour day at the competition site, so I stayed home to share some quality time with my youngest boy.  Will and I had planned a pizza and movie night together, and I had told Will he could have a "sleepover" in my room, a prize which, to a boy who has complained of feeling lonely in his own little bed ever since he could speak, is the equivalent of winning a gazillion dollar lottery.  We enjoyed a lovely evening together, and after the movie, we headed upstairs for some before-bed reading.

She stretched out lazily on the duvet cover, eyes half-closed, happily dreaming of the hours to come in which she would finally have her way.  But wait -- what was this?  Why was The Smaller Boy coming into this room wearing pyjamas and armed with books and stuffed animals?  Why was he climbing into this bed and burrowing beneath the blankets?  In a panic, she dove under the boxspring for safety, asking herself how things could have gone so horribly wrong.

The sleepover lasted all of fifteen minutes.  Will is a boy of sameness and routine; lying in a different room in the dark with all of its unfamiliar nighttime noises and shadows, even with his mom beside him, was too much when he knew his own comfortable room was right down the hall.  I tucked my boy into his cozy flannel sheets and kissed him goodnight, making promises that he could come back to my room when he woke in the morning.  With his universe restored to normal, Will drifted off to sleep within moments.

She listened carefully as the small footsteps trailed off faintly down the hallway.  When she was certain that The Smaller Boy was not coming back, she breathed an enormous sigh of relief.  "It's only a matter of time now," she thought smugly, "and sweet victory will be mine."

A couple of hours later, I climbed into bed in a state of drowsy contentment; it had been a good day.  My eyes drooped heavily in the dark room and my breathing slowed... until I felt something slowly creeping towards me....

"If I move very slowly," she thought, "maybe I won't be noticed."  She inched her way forward, quietly, quietly, always keeping her eye on the prize.  Finally, she was there.  She gently lowered herself to a curled up position on the empty pillow, and purred inwardly when The Girl beside her didn't make a motion to move her.  "Finally," she mused joyfully, "the pillow and The Girl are mine alone!".

And that, friends, is the story of how Maggie the cat's dreams all came true last night.﻿
﻿ 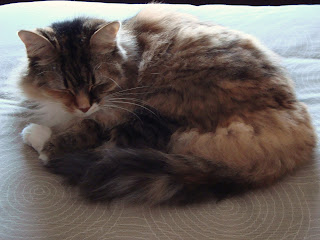