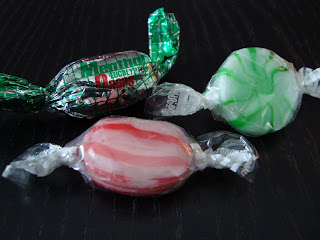 Yesterday, for an unexpected treat, I decided to take the boys out to lunch at Swiss Chalet.  As the three of us approached the restaurant entrance, we met up with an elderly couple who were moving quite slowly and struggling with opening the heavy door.  I smiled at them and moved to take the door handle from the gentleman (who was walking with a cane), but he cheerfully insisted he hold the door for me and the boys instead.  Once we were all inside, the man and his wife began a friendly conversation with us, asking Noah and Will if they had had a nice Christmas and if Santa had been good to them.  The man then asked to shake the boys' hands and wish them a happy new year, and when Will shook his hand, the man said jovially, "Oh, look what fell!".  He had slipped a hard wrapped candy into Will's palm with his handshake, and he proceeded to do the same for Noah and I when he shook our hands and wished us all the best in 2012.  This elderly couple was so sweet and kind to all of us, and chatting with them started our lunch off on a happy note.

It turned out that the elderly couple was seated right next to us in the restaurant, and it also turned out that there had been some misunderstanding about time between the couple and the friends whom they were supposed to meet there, so the husband and wife were sitting and waiting with drinks while the boys and I ordered our lunch.  Several times, the man shuffled carefully over to our table in the hour we were there so he could share a story or an interesting trick with the boys.  Once he showed them how to draw a duck using a single line without ever lifting the pencil from the paper: 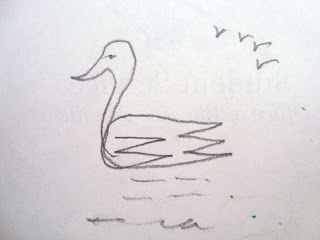 Once he pulled some little papers with jokes on them (the kind you get in Christmas crackers) from his pocket and entertained the boys with his enthusiastic telling of riddles.  At the end of our lunch, the man told me with a gentle smile what clever boys I had, and that he was glad for the mix-up with their friends, because talking with us had really helped make his day.  I'd be lying if I said I wasn't moved by his genuine, heartfelt sentiments, or that I didn't feel the same way myself.  The boys and I all agreed that we were really glad we had decided to go out for lunch on that particular day.

Several hours later, I was thinking about the events of the lunch hour and I realized that our experience had gone against everything I have taught Noah and Will about personal safety.  Like many parents today, I have repeatedly told my boys that they should not talk to strangers, nor should they ever take candy from someone they don't know.  (For the record, I did tell the boys afterwards that we were throwing out the candies the man had given us because we didn't know the person they had come from, to which Will very seriously replied, "Yes, and anyway, who knows how long that candy might have been in his pocket.  That man was VERY old!".)  I thought about how I  maybe should have handled things differently to send a consistent message to the boys, but in my heart it felt sad to think that we might have just ignored these two kind people.  We live far from most of our extended family, and the boys rarely have opportunities to interact with people from much older generations.  The delight in both the boys' and the old man's eyes as they spoke with each other showed me that there was a real human connection made between them, and I was forced to face the complex truth that sometimes, a stranger is just a sweet 80-something year old man in Swiss Chalet who carries candies and Christmas cracker jokes in his pocket and tells you that your boys remind him of his own two sons when they were young long ago.

Experiences like these remind me that parenting is tricky business sometimes.  While it would be nice to be able to clearly explain to the boys the differences between good and bad, right and wrong, in simple black and white terms, the truth is, sometimes in between there are some really lovely shades of gray.
Posted by Lisa at 10:59 AM