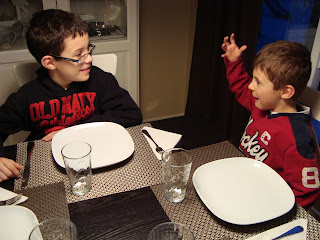 The Christmas season has now come and gone in our house, and Noah and Will and I are enjoying what feels like just a regular old week of holidays before the boys return back to school next Monday.  The decorations have been stored away for another year, the new toys have found a home on shelves, and the festive holiday music playlist has been deleted from the iPod.  (Oh well, it's not like this house has seen a "silent night", or morning or afternoon, for that matter, since the holidays began, anyway!).  Throughout the fall, I had become quite used to a quiet home between the hours of 8:30am and 3:00pm once the boys were settled into their school routines, but having them both at home for two weeks has reminded me of just how much they can talk!  (I can hear my dad laughing all the way from Sault Ste. Marie right now; I'm sure, after years of telling me he was going to build me my own stage, that it must seem only fair to him that I'd end up with children who also have the gift of gab!).

I guess when you have two very bright boys who take advantage of their extra spare time during the holidays to read and think and question things, it's inevitable that all of the ideas they're processing in their busy brains will eventually come spilling out in lively conversations.  Matt and I have heard everything from the fascinating to the practical to the bizarre over the past couple of weeks, and more than once, we have sat there, staring wide-eyed at each other, telepathically (because that's the only way we can hear each other over the boys' constant chatter) communicating the mutual thought, "Oh my GOODNESS, will they ever be quiet?!".

More than one morning has started with Will coming into our room in the dark, with a huge hockey book in his arms, to excitedly recite endless bits of trivia to his still-sleeping parents (because apparently we NEED to know these things before 6:30am).  He's told me over lunch that if he were to fart 5000 times consecutively, he would produce enough energy to run a whole factory.  He's wondered aloud to me, "All cats are born, not made, right?", which then resulted in me having to explain, rather awkwardly,  how cats are first made, and then born.  And he's launched into several indignant rants over injustices like there not being a newspaper to read on January 2nd  (apparently it's very disrespectful of the newspaper company not to consider the kids who would want to read the paper over breakfast that day, you know).

Noah is not as loud as Will, but he is just as adept at long-winded conversations.  He likes to ask us questions we'll never know the answers to, like "What is the densest thing in the universe?".  (I would like to answer, "My brain, because that's what happens when you never get a moment's peace!", but apparently the correct answer is "a neutron star".)  He's informed me this past week that once a chicken lived for 18 months after its head was cut off (where does he read this stuff?), and has explained to me at length how he plans to develop force feedback for the XBox Kinect system when he grows up.  (I'd be impressed if I knew what that meant!)

When you put the boys together in a room, it's best to duck because ideas (and arguments) come flying out of their mouths with such force and speed that they have the potential to inflict damage if they strike anything.  Noah and Will chattered excitedly for hours when our water cooler broke over the holidays and we had to replace it; they thought we would let them have the old one to "build stuff" out of and were planning like a couple of mad scientists.  (I'm now guarding my washing machine and my toaster very carefully!)  They got into a heated debate over features while designing plans for a high tech snow fort that frankly, they wouldn't have enough snow to actually build if you took the precipitation of three heavy Northern Ontario winters and dumped it in our yard.  One night at a holiday dinner with Matt's side of the family, the boys took out the big dictionary just for fun and spent half an hour shouting out new words and definitions.  (They're the life of the party, these two, I tell you!)

They say that silence is golden; if that's the case, I am certain this family will never attain that elusive prize.  Catching a glimpse (albeit a noisy one!) of the creative and critical thinking processes that go on in the boys' minds, though, offers a richness of another kind, one I realize I'm very fortunate to experience.  I'm sure if you ask Noah and Will, they'll explain to you at length that platinum is way better than gold, anyway! 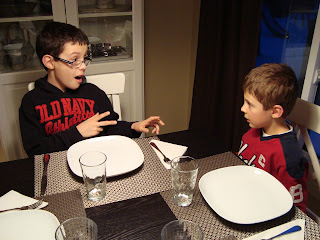 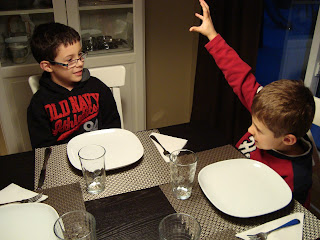 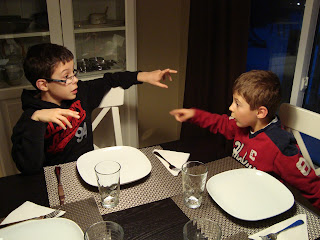 (p.s. Noah just informed me that the title of my post contains a neologism. I'm off to get out the big dictionary.)﻿