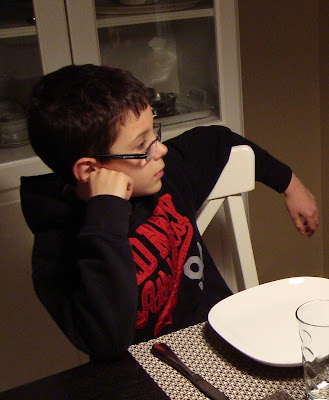 Noah has been driving me crazy over clothes lately.  I almost feel bad saying that, because Noah, who is so easy-going and level-headed and mature, very rarely drives me crazy over anything.  In the past couple of weeks, though, whenever the temperature outdoors has taken a significant nosedive from its unseasonable warmth, Noah and I have had a standoff in the morning.  One day I suggested he wear jeans instead of shorts, and he vehemently protested, "Everyone else will be wearing shorts!"  (Trust me, you would not have wanted to see the look of utter disgust he threw me when we arrived at school and saw his friends all (shivering, I might add) in shorts!)  I insisted he wear his winter coat instead of a spring jacket one day (because the temperature had plummeted back to sub-zero), and he huffed and stomped around and muttered several times under his breath, "Everyone else will be wearing a lighter jacket."  It has kind of caught me off-guard, seeing the boy who previously had no opinion whatsoever about clothing suddenly become keenly aware of being "just like everyone else."

I realize that this awareness of others and the desire to fit in with them is a normal part of human development, and part of the way we establish our own identity.  I went through it at his age, too.  I have a very clear recollection of a heated argument between my mom and I over whether it was practical or utterly ridiculous to wear rainboots to school in grade 8.  (You can guess which side I was on, but honestly, today I take my mom's point of view and splash around happy as a duck in my wellies on rainy days!)  I also remember being freezing cold for six months out of the year as a teenager because, in my efforts to dress like other kids my age, I insisted on wearing Matt's leather cross-country team jacket unbuttoned on my daily half-hour walk to and from highschool, in frigid Sault Ste. Marie winters.  (I took the word "cool" to a whole new level.)  My parents used to use the example, "If all of your friends jumped off a bridge, would you jump too?" to try to get me to see that it was not always wise to follow others.  I'm sure I probably just rolled my eyes at them and protested that there was a big difference between clothes and bridges, because when I found myself inadvertently using that exact same line on Noah last week, that's what he did to me.  I realize, as a parent now, that my mom and dad probably used that example because it's really difficult to otherwise explain to a child this valuable life lesson that took us adults decades to learn (and that sometimes, honestly, we all still forget).

We humans are pretty hard on ourselves and each other sometimes, even as grown-ups.  While we talk about acceptance and acknowledge that difference is a beautiful thing, how often do we still stare and judge, shake our heads and talk behind backs, exclude and ignore, build ourselves up by taking others down?  How often do we doubt the voice within us that wants so much to be heard, and listen instead to the thousand outside voices that try to shout in unison, the ones that drown out the softer, more meaningful sounds?  Children who ridicule other kids in the schoolyard for not wearing the right clothes, or not playing the right sports, or not listening to the right music, become adults who inwardly criticize other parents in the schoolyard for not feeding their kids the right foods, or not signing them up for the right activities, or not limiting their daily screen time.  There are always both kids and adults in the world who feel left out and lost and lonely because they think that they don't fit in.  Sometimes we forget that it's okay to be ourselves and to let others be themselves, too -- we don't need to be the same to appreciate and respect one another.

I like to think that I am confident in who I am, but I'll admit that inside, I have always had a strong desire to please other people.  I really work at not letting that desire sway me from being my best self.  There are times, even here on this blog, where I have a moment or two of panic after I hit "publish", wondering if people are going to judge me for my thoughts, for what I believe in and feel is important, and hoping that people are going to "Like" my posts, and, by extension, me.  It takes courage for all of us to show the world what's in our hearts, and we should remember to be kind to others when they have the bravery to reveal their true selves.  Our relationships with others have the potential to enrich our lives beautifully; we are social creatures with a need to feel connected to and accepted by others of our kind.  We have to watch, though, that our need for belonging doesn't ever make us think that we're not good enough just the way we are.

In day-to-day life, Noah's desire to want to wear the same kind of clothes as his friends is pretty harmless.  But it's the realization that soon there will be other, much more important issues for Noah to face, and decisions for him to make, that causes me to think so much about how he might be influenced by his peers.  I hope that Noah will realize that what makes him, or any individual, so wonderful is that none of us will ever be "just like everyone else".  I hope he'll understand that he shouldn't want to be just that.  I hope Noah will always be able to tune out the noisy voices that go against what feels right to him, and hear most clearly the one strong, confident voice deep within that will forever lead him down the road to his own happiness. 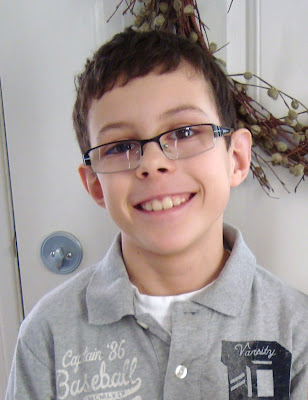