Yesterday afternoon, Will spent a long time burning off some of his endless energy in a fun and lively road hockey game with the boys next door.  When he came back inside, red-cheeked and smiling, he quietly put away his coat and boots and gloves and hat and wandered off to do whatever it is that he does when he's not otherwise occupied.  There was no mention of the fact that he may or may not have had a serious altercation with the giant, Grimace-like, hockey-ball-eating evergreen tree that lives adjacent to our front walkway. 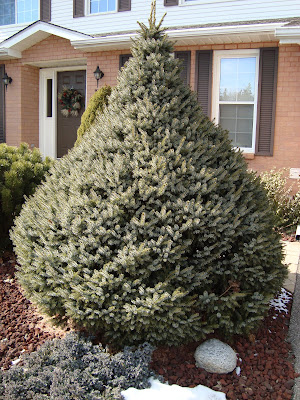 Do you see the resemblance?

No, Will figured he'd just let Matt and I discover the evidence of that particular incident in (literal) bits and pieces over the next 24 hours, kind of like one discovers things in that birthday party game where everyone passes the parcel and the person holding it when the music stops gets to remove a layer of wrapping paper to reveal a prize.  Only less fun.

On walking past our front entrance later in the day, I noticed a rather abundant collection of dead evergreen needles scattered in little piles ALL over the doormat.  This was not a particularly odd discovery, as with two boys in the house, more days than not I find little piles of something scattered all over that mat, so I just shook the mat outside and carried on.  When I later sat down beside Will, he started complaining about his back feeling all prickly, like something was stabbing him, and as he wriggled about, more dead evergreen needles started raining down onto the couch and floor.  By this time, I was curious as to how all of these needles had accumulated on Will's person, and he casually mentioned that he had bumped into the Grimace tree while trying to retrieve a ball outside.  I gave his shirt a shake-out to get rid of any other potentially offending needles and figured that was the end of it.

The afternoon progressed rather uneventfully, but after dinner, I heard Matt exclaiming in disbelief as he stood beside Will's chair at the dining table.  The kitchen floor was littered with more dead evergreen needles, enough that the Swiffer vac couldn't pick them all up.  Where these needles kept coming from, we weren't sure we wanted to know, but it was clear that Will had done more than bump into that tree.  (More like the tree had chewed Will up and spit him and all of its dead needles out at the same time, in some wild and desperate attempt at spring cleaning.)  Will was left wandering the house like Pig Pen, leaving a trail of debris behind him wherever he went.

By the time Will had showered and gone to bed last night, we were pretty sure we had seen the last of the dead evergreen needles.  Wrong.  This morning, in the we-need-to-be-out-the-door-now dash, I discovered that Will's hat from yesterday was more porcupine than headwear; it had needles sticking out all over in every direction, and there were needles stuck to every visible piece of velcro on Will's jacket.  The final prize of this exciting little game came when I went to dump the five bazillion dead needles out of Will's boots, and discovered, for the second time this season, that his winter footwear had holes worn right through the soles on both feet.  (Thankfully, because I really don't enjoy this particular kind of surprise, I already had a third pair of winter boots tucked away in the closet for just such a situation!)  And don't ask me how a child manages to work his way through three pairs of boots in one winter.  I can't even begin to imagine it. 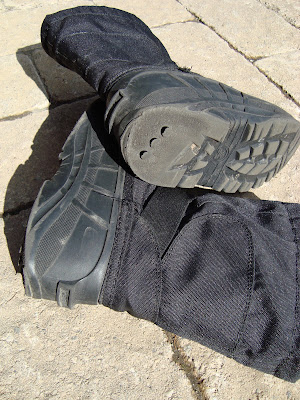 Yes, life around here is filled with fascinating discoveries, one after the other after the other.  Funny thing is, after having lived long enough with young boys, these kinds of happenings don't even surprise me.