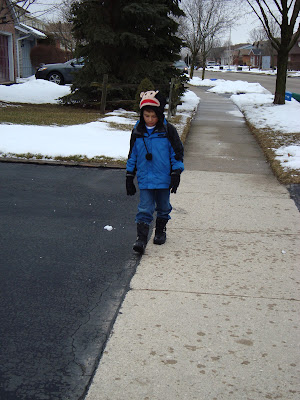 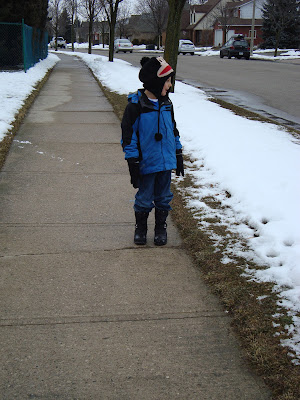 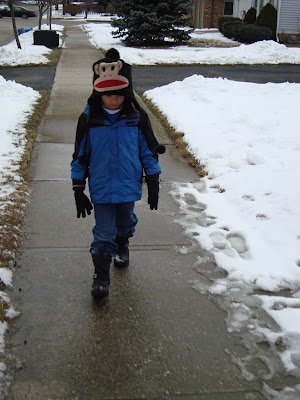 Will always falls behind Noah and I as we make our way to school in the morning.   It's not that he wants to be late (one frightened middle-of-the-night awakening this week showed that the idea of getting to school after the bell and having to go to the principal's office is exactly the stuff Will's nightmares are made of), but he honestly can't help himself.  As I look back at him to coax him along, his eyes are focused anywhere but forward, and he's once again wandered off the sidewalk to study something on the ground or in the trees.  His lips form words silently but busily, a testament to the whirlwind of activity going on in his mind, which never, ever seems to rest.  The business of getting to school has roamed far from his conciousness, much like the single red balloon we saw this morning in the sky above the school yard drifted off into nowhere.

Sometimes I've wondered what it must be like to be inside Will's mind, that ever-moving, intricate collection of springs and wheels that puzzle and discover and invent and plan and worry and wonder and have epiphanies.  Sometimes Will enlightens me in this regard by running to catch up to me on that walk to school and spilling forth a breathless jumble of questions and certainties:  Do we have any extra big comfortable chairs we're not using because I want to build a new kind of sled.  When I'm older I am going to open my own restaurant that has food that looks fun and tastes really good but is still healthy.  And if you're ever in the States, never order the macaroni and cheese from Romano's Macaroni Grill because it has as much saturated fat as 20 strips of bacon.  I am the 99th most popular kid in my school, you know.  According to my calculations, I used to be the 100th most popular kid, but the kid who was in front of me left the school, so I moved up.  We need to order that Worst Case Scenario Survival book from Scholastic this month because I like to be prepared for things.  Are you actually listening to me? Good; just checking.  If you were trying to use up all of the magnetic letters on the fridge, and the only letters you had left were S H I T, what would you do?  I would make the word THIS and then I wouldn't have to get in trouble.  Did you pack my library book?  Are you sure?  Hey, I have a new idea for a comic strip I'm going to write and draw when I get home today -- do you want me to tell you about it?

When Will soliloquizes on and on like this, I find it exhausting, not because it isn't fascinating, but because I suddenly realize that the noise in Will's head sounds remarkably similar to the constant cacophony of thoughts that runs through my own.  While I might not be planning to build sleds out of chairs or figuring out how to avoid writing swear words on the fridge, I have my own relentless questions and exciting ideas that all fight for attention at the same time, and mental lists, and sudden breathless realizations, and worries about all of the what ifs in the world.  It's in those moments of really hearing Will that I realize how very well I understand him, this boy who utterly puzzled me for the first several years of his life.

I was looking through some old photographs the other day, and I came across one of me from grade two, when I made my First Communion. It startled and amazed me when I placed that photo alongside one of Will from school this year (also grade two). 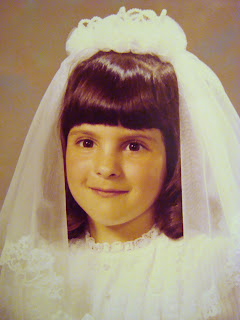 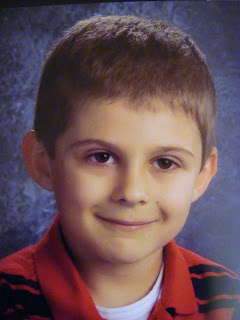 I shouldn't have been surprised at all to see a reflection of myself in my youngest son. While of course, Will and I are each our own unique person, it's been clear for awhile that we share the same kind of wondrous activity behind our very similar deep brown eyes.  I think it's comforting for both of us to know that when the noise inside won't quiet down, there will always be someone to talk to who understands.