Soap, shampoo, and a SPIDER! 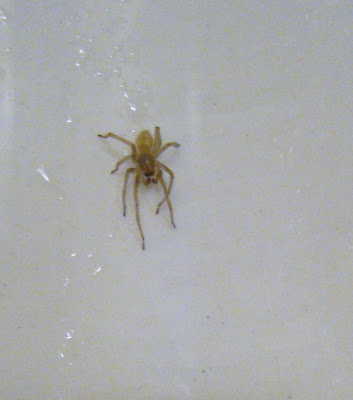 I shared my shower with a spider this morning.  There I was, minding my own business, taking a few moments to fully wake up under the warm, running water and using the quiet time to think about stuff (because really, isn't the shower the best place for thinking?), when all of a sudden, out of the corner of my eye, I noticed something skittering towards me on the wall.  My first thought in my instantly VERY awake state was a panicked string of words not fit for repeating here.  But then, and I'm not sure whether it was because of all the yoga I've been practising lately, or the memory of my poor mom's long ago run-in with an earwig in the bathtub that resulted in a broken rib or two in her attempts to escape it, or the constant pleas from Will to let undesirable creepy crawly things "live their natural life" rather than schmucking them, I calmed down, and decided to do nothing.

Yes, folks, there was a spider, less than three inches from my face, and I did nothing.  Sure, I kept throwing him furtive glances over my shoulder while I shampooed and rinsed, and I wasn't particularly happy about him being there, but I managed to convince myself that really, he was only an innocent little spider, and likely not able to chew my arm off or anything.  After awhile I got more bold around the spider, and started studying him with an inquisitiveness Noah and Will would have been proud of.  I noticed with fascination that he was dipping his front legs in water droplets on the shower wall and then putting each leg in his mouth (do spiders have mouths?) for a few seconds, as if he were taking a drink (do spiders take drinks?).  I started thinking like the boys do, and had a Eureka! moment where I realized that if I attached a tiny squeegee-type cleaning implement to the spider somehow, he could actually clean my shower while he roamed about!  Now wasn't that fascinating!?

And just as I was about to go merrily about the rest of my day, Will, whose eyeballs have been absolutely glued to this book 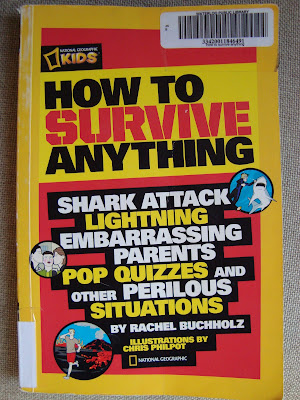 since we borrowed it from the library on Saturday, and who is now our resident expert on all of the terrible things that could possibly happen to a person, very matter-of-factly dropped this little gem of advice on me:

"You'll be alright as long as you don't see a Sydney funnel-web spider.  It's black, and about the size of the palm of your hand.  It will grab you, bite you several times with fangs as sharp as a sand tiger shark, and kill you if you don't get treatment within an hour."