Bedtime stories with the President

When you have a child with as much imagination and as much uncontainable energy as Will, you learn very early on to allow lots of extra time for everything.  Simple tasks that should only take a few minutes, such as getting dressed or eating a snack or putting things away, inevitably end up taking much, much longer in our house because there is always something way more fascinating to attract Will's attention and enthusiasm.  As an example, I asked Will the other night to please go and give Maggie her cat treats, which he started walking towards the kitchen to do.  Less than a minute later I heard the cat wailing hysterically at him, because Will had already forgotten what he had set out for.  His eye had caught the magnetic letters on the side of the fridge as he walked by and he was so compelled to write a message in a secret language that he was completely oblivious to the screaming cat. 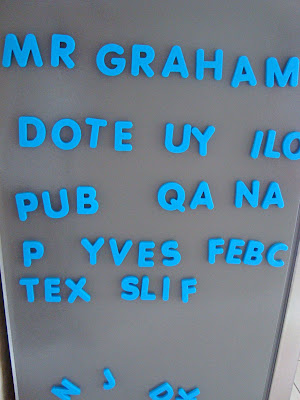 I do not know who Mr. Graham is, nor do I have any clue what the message means in Will's secret language.  I have not ruled out the possibility that he has somehow made contact with aliens and is communicating with them using a blue plastic alphabet.

A couple of nights ago, we sent Will upstairs a good hour before his bedtime to shower, put his pjs on, and brush his teeth, so he would have lots of time to do his creative thinking and still get to sleep when he should.  He seemed to move through the first two tasks at a good pace, but then he spent a long, long time standing in front of the bathroom mirror.  (I didn't ask him what he was doing, because honestly, after eight years of this kind of behaviour, you come to realize that as long as he's not doing any harm, sometimes it's just better not to ask.)  When Will finally emerged from the bathroom he was wearing a big grin and a very carefully coiffed damp hairdo.  He informed me quite matter-of-factly that he had styled his hair like Bill Clinton's, and then he sat down beside me on the couch so we could read together, without saying another word, as if it were the most normal thing in the world for an eight year old to style his hair like Bill Clinton's.

I treated this situation like the many other interesting (odd) ones I've found myself in as a result of Will's fascinating mind;  I told him he had done a really good job and secretly wondered what creative thing he would think to do next.  Apparently, though, he liked this presidential hairstyle idea so much that he wanted to stick with it for awhile.   Last night after Will had showered and put his pjs on, I heard him repeatedly running back and forth between his room and the bathroom, with a significant pause in each location.  When I went upstairs, I found Will's Scholastic Almanac open on his bed; he was dashing in to study a photo in the book, and then racing back to the bathroom to comb another section of his hair just so.  When he was pleased with what he saw in the mirror, he proudly looked at me and declared that he was... 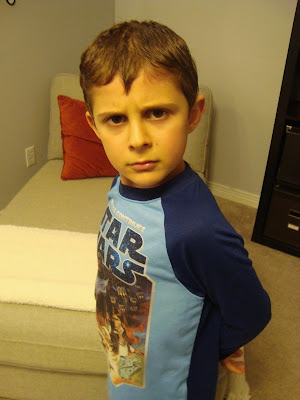 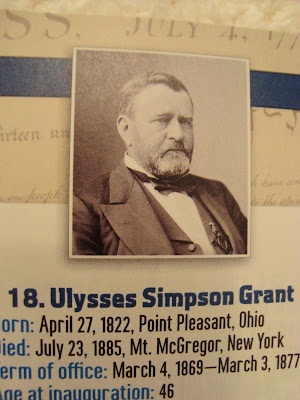 Ulysses Simpson Grant!(?)!
I really wish I had thought also to take photo of his Bill Clinton do -- it was bang on!
Will happily told me last night that he is going to style his hair like a different American president every evening from now on.  The enthusiasm with which he's approaching this little project of his makes me smile.   For as many times as I've been frustrated with his inability to stay on task when we're trying to get something done, I've also loved the way Will shows me that the same old things don't always have to be done in the same old way; there is always potential for the unique and the entertaining in the day-to-day.
I noticed earlier this afternoon that Will's almanac is once again on his bed; it is sitting open and upside-down with a page in it carefully marked.  I wonder which American president I'll be reading stories with tonight....
***
Update:  I couldn't leave you in suspense.  Shortly after I posted this, Will came downstairs as Theodore Roosevelt.  You're welcome. 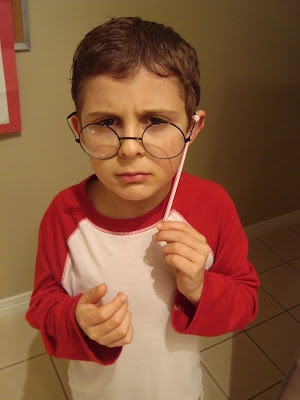 ﻿
***
This post about something that made me smile is linked to this week's Writer's Workshop over at Mama's Losin' It.﻿
﻿