Popcorn is one of Noah and Will's favourite weekend snacks.  No matter what the boys are doing or where they are in the house, the sound of hot kernels exploding in a pot on the stove and the smell of melted coconut oil wafting through the air invariably mean that within seconds, both of them will show up eager and smiling in the kitchen.  I'm happy to give the boys this snack when they request it; if it is prepared in certain ways, popcorn is nutritious as well as fun to eat!

This weekend I decided to get creative with our popcorn snack by adding dried cranberries and toasted pecans to it, and drizzling it with a coconut oil and maple syrup topping that was lightly spiced with cinnamon and allspice.  Oh my.  My popcorn connoisseurs all agreed that the result was absolutely yummy! 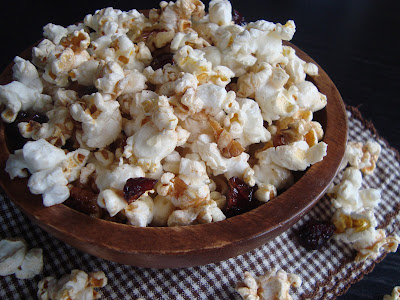 Plus:  1 cup pecans, roughly chopped
1/2 cup dried cranberries (I use ones that are sweetened with apple juice)

Lightly toast the pecans in a small, dry skillet over medium heat.  (This should only take a few minutes.) Set the pecans aside.

In a large saucepan with a tight-fitting lid, heat two tablespoons of coconut oil over a high temperature until it is very hot.  Add the popcorn kernels and cover the pot snugly with the lid.  Gently shake the pot continuously while the kernels pop.  Remove the pot from the heat as soon as the popping stops. (I like to make popcorn the old-fashioned way on the stove.  Despite the fact that people have come up with many newer ways to pop kernels over the years, I think the stove-top method using coconut oil is one of the healthier ones and results in the tastiest popcorn!) 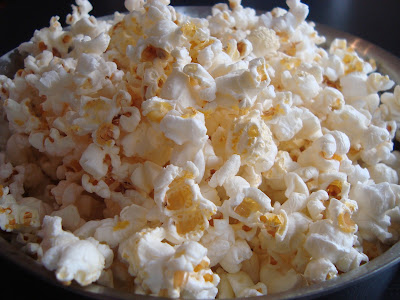 In a small saucepan, melt another two tablespoons of coconut oil over low heat.  Stir in the maple syrup, cinnamon, and allspice and mix until ingredients are well-combined.  Drizzle the warm mixture over the popped popcorn.

Add the toasted pecans and dried cranberries to the popcorn mixture and toss to combine.  Serve and enjoy!

The addition of maple syrup, spices, fruit and nuts to plain popcorn makes for a perfect fall treat on a weekend afternoon.  I hope your family's popcorn lovers will agree.
Posted by Lisa at 5:05 PM