Matt and I were busy for most of the day yesterday, taking Noah's room apart so we could redecorate it and then trying to get it put back together before it was time for him to go to bed. The boys were helpful for some parts of this process, but after lunch we parents decided that the two of them should go outside and play in the snow and sunshine for awhile.  I figured they didn't need much supervision while they were out there, that they would likely just pull out some sleds or some hockey sticks and do what most children do when they get sent outside to play in the winter.  So I shut the door behind them after calling out "Have fun!", and went back up to Noah's room to keep working.

A little while later I happened to glance out the kitchen window after coming downstairs to grab something I needed.  There in the backyard were Noah and Will, lugging not sleds or hockey sticks around, but the big wooden wagon they used to ride in when they were little.  They had somehow managed to wiggle it out of the shed (which is currently jam-packed full of summer things in storage), and they were making their way slowly, and with great effort, through the snow up the hill at the back of our yard.


I paused for about half a second until the sudden realization of what they were about to do hit me.  Luckily, I was able to bolt for the back door and stick my head out it soon enough to stop them before they jumped in the wagon and hurled themselves with glee down the icy track they had made on the hill.  The boys were completely disgusted that I would put an end to such fun before it even began.  I was completely relieved that I had narrowly avoided spending the rest of the day in the ER.

Now, I realize that I am probably more risk-averse than the average person, and likely overly cautious sometimes.  But what on earth would possess anyone to think that sitting in a wagon (with sides high enough that your feet can't touch the ground so you have absolutely no way of controlling where this wagon goes), and then flying down a slick incline where the chances of hitting a tree are pretty good, is wild and crazy fun?!?

The boys came inside soon after I short-circuited their "ingenious" plan; without the thrill of being able to risk their lives, the snow and the yard suddenly seemed boring.  If you think I was mean to squash the boys' fun, don't worry -- I'm pretty sure we haven't heard the end of the wagon plans just yet.  Last night Noah asked me where he could get a 50hp motor that would fit on a small, wheeled vehicle.... 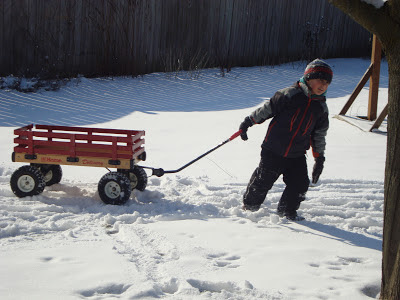