Christmas got packed up and put away at our house today.  Matt headed back to work this morning after a fun and relaxing week and a half of holidays, and while the boys were occupied creating setups and taking photos for their latest Lego animation projects, I went around to each room taking down lights and garlands and red berries and carefully tucking them all away in boxes until next December.   I always find the house looks less cheerful after the holiday decorations come down, so today I decided to find another way to add a bit of colour and excitement to our home's winter landscape. 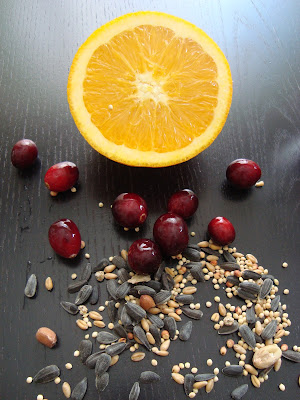 I've seen quite a few photos of homemade bird feeders floating around on Pinterest lately, and when I mentioned the idea to Noah and Will, they were keen to create some of our own.  We have many winter birds who frequent the backyard tree just outside our kitchen window (a pair of cardinals come to visit us every day, and we always have dozens of little chickadees flitting about), and the three of us were excited to make it easier for them all to find food in the snowy months.  Will wanted to make some feeders like the ones he had made at school one year, using pinecones he found in our backyard, and Noah and I decided to each take half of a hollowed out orange as the base for ours.  With wild birdseed we bought earlier today at Bulk Barn, some natural peanut butter, some fresh cranberries we still had in our fridge, a bit of yarn, and some toothpicks, we were able to make a nice collection of simple but pretty feeders for our feathered friends (and the three of us all had a lot of fun in the process!)

To make Will's bird feeders, we started by making a tight loop around the top of each pinecone with yarn, and tying a double knot to hold it, leaving the yarn ends long for later tying around a tree branch.  We spread natural peanut butter all over each pinecone with a knife, and then rolled each pinecone in birdseed scattered on a plate until each cone was completely covered. 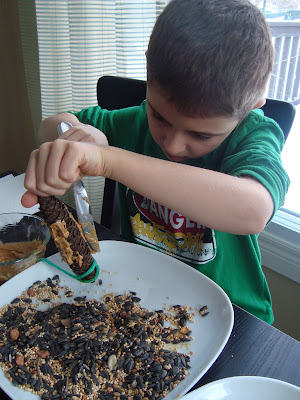 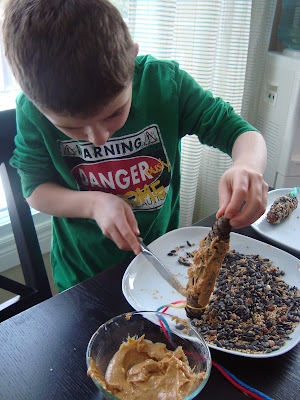 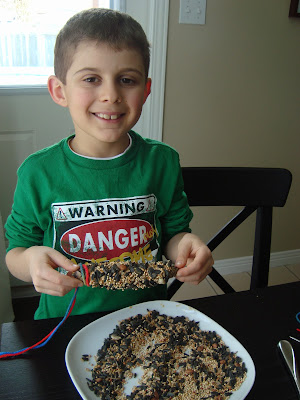 Once we finished coating all of the pinecones in birdseed, we tied them to various branches in our little tree outside and waited for the birds to arrive. 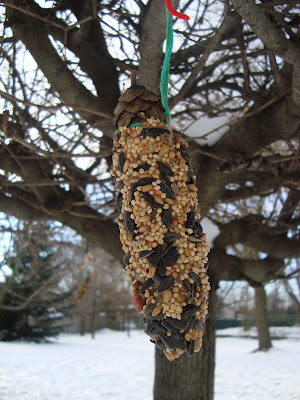 To make Noah's bird feeders, we first cut an orange in half and scooped out the flesh.  (This project results in a little snack for humans, too!)  Using a darning needle, we threaded the yarn through the orange peel from top to bottom on one side and then from bottom to top on the opposite side of the navel on the orange's base.  We repeated this process with another piece of yarn across from the first two holes, so that we had an X on the outside base of the orange, and four long strings poking up for tying to a tree branch.  (And because I'm quite sure that my explanation makes NO sense whatsoever, here are a couple of photos to show what I mean!) 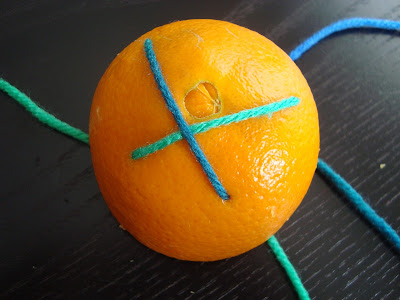 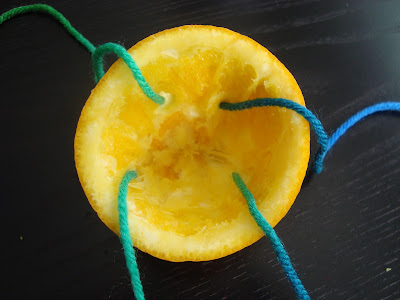 We then stirred about a cup of wild birdseed with about two tablespoons of natural peanut butter in a bowl until we had a sticky mixture, and we pressed this mixture tightly into the hollowed out orange halves until they were full. 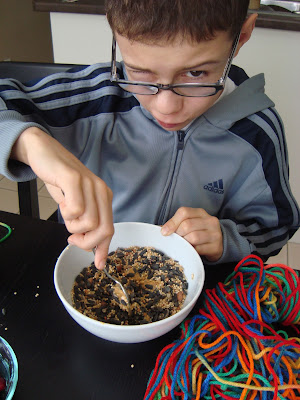 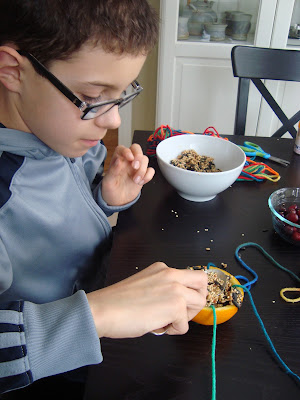 For the finishing touch, we threaded cranberries onto toothpicks (we used two berries per pick) and stuck them into the orange peel at intervals all around the top of the orange halves, leaving space for the birds to still get at the birdseed. 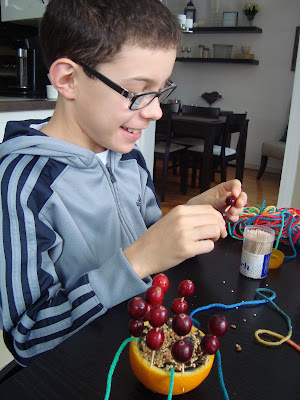 We tied these feeders onto branches in our tree, too, and then smiled with the results of our little project. 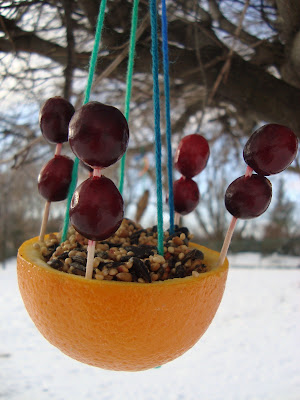 Within 30 minutes of us hanging our pinecones and oranges, we had birds visiting our feeders!  All three of us were so excited that the chickadees liked their homemade treats, and we're looking forward to continuing to feed and watch the little birds throughout the winter months.  We'll be watching especially closely tomorrow around the time when our cardinals usually come by.

I could have done a million "necessary" things this afternoon; there were needles and berries all over the carpets from my undecorating process, the floors needed mopping, and there were dishes and loads of laundry to be done.  I feel really good about the fact that I chose to ignore that for a little while to do something so rewarding and fun with my boys instead, something that will likely bring us smiles for days to come this winter as well.  I plan to create many more simply joyful moments like this in 2013!
Posted by Lisa at 9:06 PM