Quinoa and rice pilaf with walnuts and cranberries

Quinoa and whole grain rice are pantry staples around our house; I often include one of these nutritious and gluten-free foods in our family's evening meal.  On a recent trip to Costco, I noticed an interesting Sprouted Rice (brown, red, and wild) and Quinoa Blend made by TruRoots that I was curious to try, and since then we've been enjoying it very much with stirfries or as a side dish in meals where before I would have used one or the other.  The blend is tasty cooked plain, with a bit of Herbamare for seasoning, but for fun one day I decided to see what would happen if I added the flavours of orange and cinnamon, the sweetness of dried cranberries, and the nutty crunch of some toasted walnuts.  The end result was delicious, and this pilaf has become a new side dish favourite.

Quinoa and Rice Pilaf with Walnuts and Cranberries 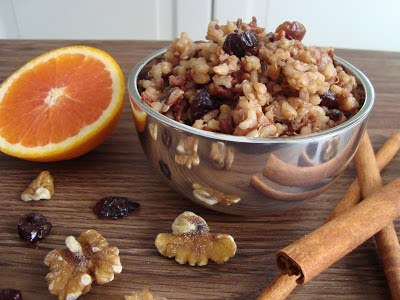 In a medium-sized saucepan, combine the water, orange juice and cinnamon and bring the mixture to a boil.  Stir in the sprouted rice and quinoa blend.  Reduce the heat to low, cover, and simmer for approximately 30 minutes or until all of the liquid is absorbed.

We like to serve this wonderfully flavoured pilaf alongside some kale sauteed in a little olive oil, and either roasted chicken or pork.  Together these foods make a hearty, nourishing, and warming meal just perfect for a winter day.
Posted by Lisa at 2:15 PM