Fresh picked apples are now in season, a fact that makes the apple lovers in this house very happy. We all relish the simple fall pleasure of biting into crisp, sweet-tart fruit at some point every day, and the boys especially look forward to the special treats that apples get baked into this time of year. Because I had a fruit drawer bursting with new crop Ginger Golds and Cortlands this afternoon, I was inspired to try making some cinnamon and maple flavoured doughnuts with juicy pieces of apple nestled in them as a surprise after-school snack.  Judging by how quickly these doughnuts disappeared, I'd say the boys declare this recipe a winner! 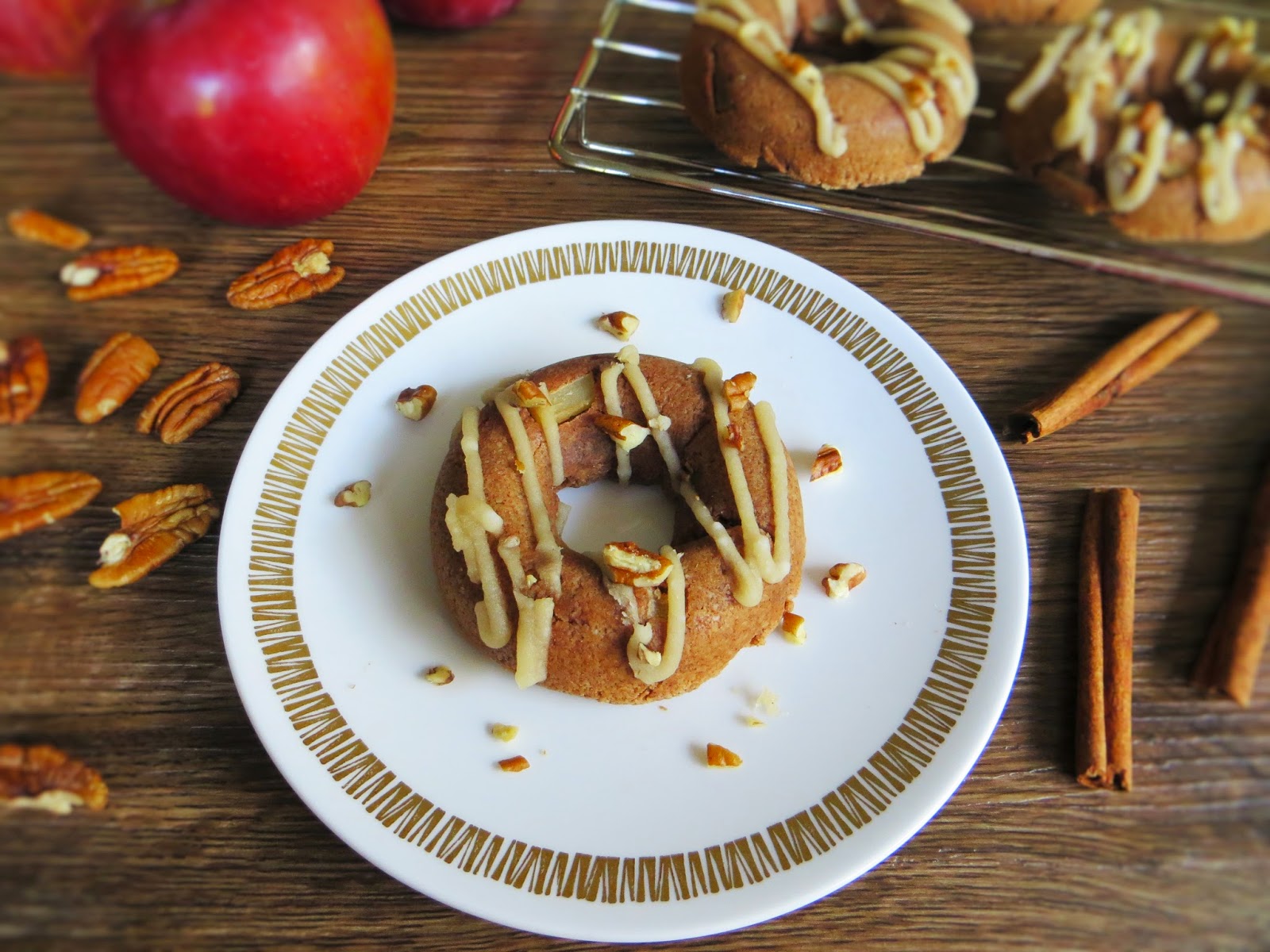 plus 2 tbsp chopped, toasted pecans for sprinkling on top of the doughnuts


Preheat the oven to 350 F.  In a large bowl, combine the almond flour, arrowroot flour, cinnamon, baking soda, and sea salt. Whisk together the water, apple juice, maple syrup, and vanilla in a smaller bowl, and then add the wet ingredients to the dry ingredients.  Stir well until a uniform dough forms.  Fold in the pieces of chopped apple.

Divide the dough into six equal parts.  Take one portion and roll it under the palm of your hand to form a log shape that is about seven inches long.  Carefully lift the log and place it into the well of a doughnut pan, joining the two ends together to form a circle.  (The log will probably break a little, but don't worry -- just smooth out the place where the ends meet and any cracks or breaks with your fingers until you have a nice looking doughnut shape in the pan.)  Repeat this process with the remaining portions of dough.

Place the filled doughnut pan in the preheated oven and bake for 15 minutes.

To make the glaze, beat the coconut butter, coconut oil, and maple syrup in a bowl with an electric mixer on medium speed until it is smooth.  Place the mixture into a piping bag with a small round tip, and pipe the glaze onto the tops of the doughnuts, zig zagging back and forth across each one. Sprinkle the toasted pecan pieces on top of the glaze and serve the delicious doughnuts to the family members who will be hovering over you waiting for one the whole time you're working.  :)

These doughnuts are not overly sweet, but still bursting with flavour thanks to the apples and a generous helping of cinnamon.  They're a perfect treat for fall afternoons!

This post is linked to Gluten-Free Wednesdays.
Posted by Lisa at 7:11 PM