Are you there, Mom?

My mom was here visiting over the past week.  It was so wonderful to have her company; we shopped and shared heart-to-heart conversations, went to hear my brother Frank and his band play a fantastic gig when they were in town, played Bananagrams with the boys and had a successful mission finding Will the mood ring he'd been wishing for for weeks, went to visit my grandma, my aunt Christina and her family for an afternoon, and just enjoyed the rare chance to spend some time together.  I loved seeing the boys so happy to have their Granny with them, and felt a tugging at my heart yesterday morning when she had to head back home, a long eight hours away.  I don't think I'll ever outgrow the wish to have my mom always close by.  When I was little, it was for comfort and security; now it's because my mom is a dear friend.

Before my mom arrived, we decided that Christina and I would pick up my mom at the airport, and then the three of us would head into Toronto for a girls' overnight shopping (and eating!) trip.  A rare, mid-week escape from life's responsibilities was a pretty exciting prospect for all of us.  Once I finished running around like a maniac getting everything organized before my absence from home, and once I got over the inexplicable bit of strangeness I felt watching my two boys walk away from me in the school yard in the morning, knowing that I wouldn't be home to say goodnight to them, I was thrilled to be on the road.

Less than two hours into our adventure, just as we were nearing our hotel, my cell phone rang.  I didn't answer it in time, and when I saw it was a Waterloo number I didn't recognize, I started to get a bad feeling.  Nobody ever calls my cell phone, really (I use it mostly for urgent matters), so I was imagining all sorts of unhappy scenarios.  When I called the number back, I got the boys' school (panic!!), and it was a student on the line since it was the lunch hour.  A tense ten minutes ensued, during which the student went to try and track down who might have called me, I got disconnected, I called back, I spoke to Noah's teacher and found out he was fine, and then I finally got Will's teacher on the line.  She had called me to tell me that Will had a fat lip and a bloody nose after tripping on a rug that morning.  My mind was racing at that point, first thinking, "Oh God, is Will okay?"  and then wondering how I was going to deal with this fact from a car in downtown Toronto.  Will's teacher assured me that Will was okay, that she was only calling to give Matt and I a head's-up about Will's banged up face before we saw it ourselves at the end of the day.  After a call to Matt to fill him in (and a later call to Will at home to let him know I was thinking about him and hoped he was feeling okay), I was able to breathe again and enjoy the rest of my 30 hours away.

In thinking about this incident afterwards, I wondered what the universe was trying to tell me with Will getting hurt at school the ONE day I wasn't close to home.  It seemed that in a subconcious way, Will was checking to see that his mom would still somehow be there for him, even though she was physically far away.  I hoped that Will knowing that I knew what had happened to him somehow made him feel better, that he somehow felt the love and hugs I was sending his way when he was having a bad day.  I hope he knows that I will always be there for him in the ways that matter most.

I miss my mom already, even though she hasn't been gone long.  As I went about my day yesterday in a suddenly empty house, it felt that there were too many pockets of silence where there had recently been chatter and laughter, and the whole house was missing the feeling of comfort and extra love that having two moms in it all week had given it.  Maybe I should trip on a rug and get a fat lip and a bloody nose and call my mom to let her know about it.  I'm certain that even though she's far away, and even though I'm a grown-up now, she'd still be there for me. 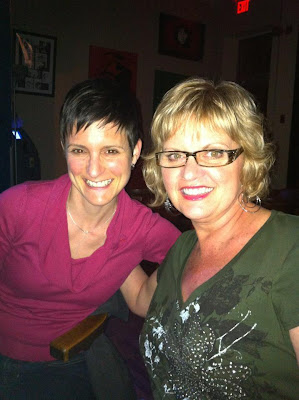 Thanks to my aunt Christina for the photo of my mom and me!  ﻿
Posted by Lisa at 9:35 AM