Noah had an appointment with our ND first thing this morning (spring allergy season has come early and hit Noah hard), and this afternoon he was on the road at 2:00 to compete in a swim meet an hour away from home.  Rather than shuffling him to and from school several times in a short period, I decided I would let him play hooky for the extra few hours and spend them relaxing and hanging out with me.

Now before anyone starts wagging fingers and tsk-tsking me with an accusatory tone, let me say that this sort of thing is an extremely rare occurence at our house, so rare that Noah didn't even know what the term "playing hooky" meant when I said it.  (Or maybe that's because it's a very outdated term.  Whatever.  Incidentally, did you know that the word "hooligan" comes after "hooky" in the dictionary?  I found that an interesting coincidence!)  But back to the fact that we are not regular school skippers:  if you combined points for Noah's and my levels of conscientiousness and rule-following, you would get a score of something close to googol. (Googol is a number with 100 zeros, and Google was named after this number, but it was accidentally misspelled.  I know this because Noah told me; he learned it in all of the reading he does in his spare time when he's not in school.)  I think it's clear now that he's fine missing what would have amounted to three hours of school today, one of which was lunch.  (And now it's also obvious how ridiculously guilty I feel about not sending Noah to school today, judging by the way I am desperately trying to justify it to you all!  Clearly I need help.)

Anyway....  Noah and I spent a really nice morning together.  We went to the library to browse for some new-to-us and exciting books to devour, shared a leisurely lunch, and played multiple rounds of UNO. 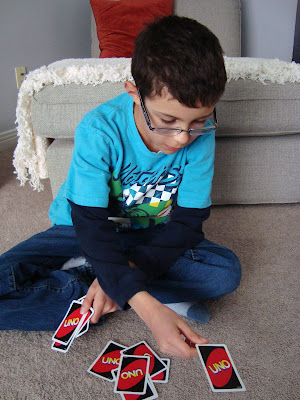 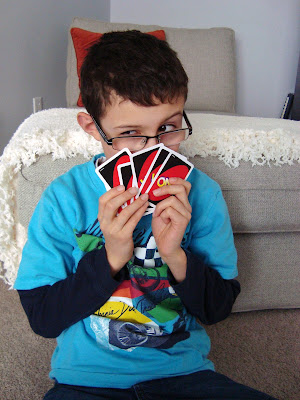 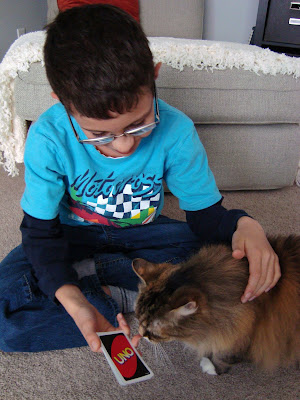 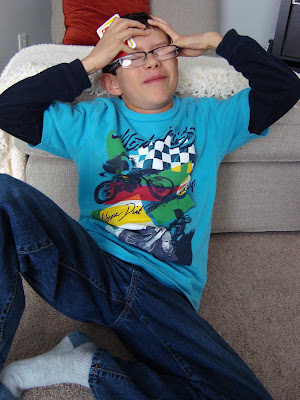 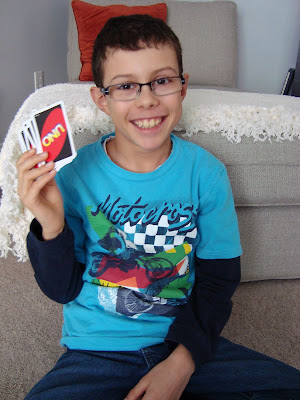 We had some really good conversations, where we discussed things that matter to each of us and wondered about some things we both don't know.  Noah confessed to feeling very nervous about his swim meet today (which I suspected based on his quiet thoughtfulness this morning), and I shared with him all the tricks I've learned to help banish worrying.  (I am very good at explaining these techniques to others, and less good at actually using them myself.)  There were no other people or activities demanding our attention this morning, and I think we both enjoyed the chance to share a few hours, just the two of us.

As Noah gets older, he gets pulled in many more directions, and the time I spend with him gets shorter every year.  He enjoys being out more with his friends, listening to music and reading more on his own, being busier with more extra-curricular activities, and spending time thinking, planning, wondering, figuring out the many intricacies of the world more independently.  I accept all of this as a normal part of his growing up.  But it doesn't stop me from really cherishing a few hours stolen from a regular school day to remind me of the countless ways in which Noah is a really wonderful kid.  I hope he never grows tired of taking a bit of time to reconnect with his mom.
Posted by Lisa at 4:07 PM