Yesterday morning, Will was still asleep at 7:00, and I had to wake him up for breakfast.

Wait.  I'm going to repeat myself to let the full impact of that statement sink in for you:  Yesterday morning, WILL WAS STILL ASLEEP AT 7:00, and I HAD TO WAKE HIM UP for breakfast!!

You might be wondering why I am making such a big deal of this fact, since millions of parents all over the world have to wake their children up every weekday morning for breakfast.  The thing is, in his eight years and thirty days of life, Will has NEVER, not once, EVER been asleep at 7:00 a.m.  Not when he was a baby who screamed for long periods of time in the middle of the night.  Not when he was a spirited toddler who sent out frequent, loud invitations to the 2:00 a.m. play parties he wanted to have.  Not even since he finally, at around age three, started sleeping regularly through the night, has Will ever not been awake at 7:00 a.m.  He has always been more of a waking up at 5:something a.m. kind of guy, and, since a dark house can seem pretty quiet and lonely to a little boy, he has always been looking for someone to keep him company at that ungodly hour.

There is absolutely no point to trying to sleep when a persistent child is trying desperately to get you to wake up.  When he was little, Will wasn't very subtle; he would come into Matt's and my room and poke us or call out our names in his very big voice (which, at 5:something a.m., sounds like it's coming through a megaphone), telling us he was hungry or bored.  Now that he's older, he's learned to win our attention with a quieter determination.  He considerately stays in his room reading until 6:something a.m. most weekend and holiday mornings, and then, after he's had the snack that Matt gets up and makes for him, he comes back and stands in the doorway to our room, breathing heavily in the hopes that I'll hear him and open my eyes and invite him in.  If I don't respond, Will quietly, quietly creeps around to my side of the bed, holds his face about two inches from mine, and just stares, boring holes through me with his piercing deep brown eyes.  If that's not enough to send me bolting upright in bed, Will then whisper-yells, "MOM?!  Are you awake??".

This is the point in time where Will usually says, "I'll be right back, then!", and dashes off to his room to pick up whatever thing is currently fascinating him most (a book, a Lego creation, a collection of something), and then jumps into my bed to talk to me endlessly about it.  Thankfully, I, too, am more of a morning person than a night owl, so I usually don't mind our early morning chats.  I have learned a lot of interesting things about my youngest boy in those dimly lit hours of the day!  But every now and then, I think it would just be lovely to open my eyes and realize that it's 7:00 a.m. or later, and that I've woken up of my own accord.

We have tried every approach we can think of over the years to try to get Will to sleep just a little longer in the mornings.  We've kept him up later in an effort to shift his wake-up time, but that only resulted in a cranky kid who hadn't had enough sleep.  We've tried changing his bedroom clock to the wrong time to make Will think it's earlier than it is so he'll go back to sleep, but he's always been too smart for such shenanigans.  Eventually, Matt and I came to accept the fact that Will's brain and body are just wired to be up and at 'em early, and we gave up all hope of ever being able to sleep until a reasonable morning hour ourselves.  That's why yesterday morning's 7:00 a.m. wake-up call (in which I was the one doing the waking!) was such a deliriously shocking occurrence.

Now, I'm not one to count my chickens before they're hatched.  I realize that it could be another eight years and thirty days before Will ever sleeps that "late" again.  But the fact that it has now happened once suggests that there's at least the possibility of a repeat performance.  Maybe next time, he'll even do it on a weekend! 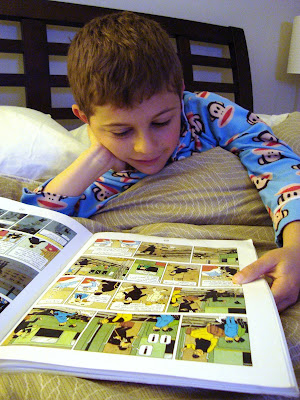