If you had a crystal ball and told me that Noah would eventually grow up to become the inventor of the world's next great "thing", I would not be surprised in the least.  He is forever thinking up interesting ways to perform the least interesting tasks in life, using nothing but his brains and the odds and ends he finds lying around the house.  Why carry your books up the stairs (so lame!) when you could devise a pulley elevator system out of wool and an old shoe box to hoist them up to the second floor?  Why turn on a light in the hall when you get up in the dark morning and want to make sure the cat didn't barf in your path overnight (boring!) when you could avoid stepping in something unpleasant by wearing the night vision headgear you rigged up with some flashlights and tape?  Why get up from your desk to answer a knock on your bedroom door (seriously?  that's so old-school!) when you could, with the gentle flick of a finger, fling the portal wide open using a carefully concocted string assembly.  (Or, for that matter, you could just scare the knocker away using a strategically hidden walkie-talkie/alarm system you devised.  Heh heh heh.)

One recent evening I was talking on the phone with someone around the time that Noah was getting ready for bed.  He was hoping I would soon be available to read and talk about some of the incredible facts in the Guinness Book of World Records with him, and by the way he was pacing the hall outside the room I was in, I could tell he was getting antsy.  He could have come into the room and quietly said, "Excuse me", or gently tapped me on the arm, and then waited until I turned my attention to him so he could ask me when I might be available.  But where would the fun have been in that?  (Really, Mom.)

Noah disappeared from the hallway, and after a short period of silence, I heard some scuffling in the room behind me.  When I turned around, there was suddenly a hockey magazine where there had previously been nothing, and the magazine was being used as a base for a large, remote-controlled Hexbug spider.  Attached to the Hexbug was this note: 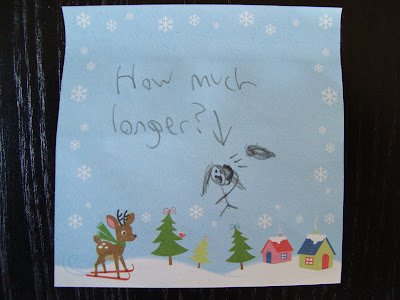 Noah was nowhere to be seen; he was out in the hallway, operating the remote control for the spider, which was now eerily making its way towards me, bringing Noah's note ever closer to where I sat talking.  His creepy interruption was certainly effective in getting my attention! 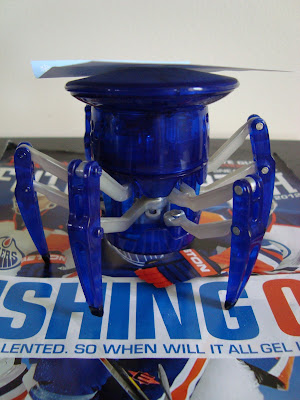 I really admire Noah's ingenuity and am always amazed at the fascinating improvisations he comes up with for what would otherwise be mundane tasks.  I'd be even more amazed if he'd hatch a clever plan for cleaning up the disaster zone his inventing almost always creates in his room.
Posted by Lisa at 3:48 PM