A public safety announcement, and a recipe for nutty chocolate tidbits

Will made his First Communion yesterday, and we all enjoyed a lovely afternoon of celebrating, first at our house, and then at church.  Extended family members travelled to be with us and make Will's day even more special, and Will, who is always a very deep and thoughtful boy, seemed to really appreciate the meaning behind the sacrament; he was serious and reflective, and full of warm smiles after Mass.  I felt so very proud seeing my sweet littlest boy being so grown up. 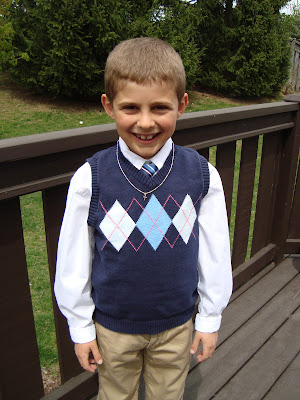 Today, however, I am feeling the after-effects of an "incident" that happened at church.  For those of you who have never been to a Catholic Mass, our churches have kneelers in them -- these are long, very heavy, padded wooden boards with feet, set low to the ground on hinges so they can be lifted out of the way when you are sitting or standing, and lowered to allow you to kneel at appropriate parts of Mass.  We were standing at one point yesterday when the family beside me in the pew randomly and suddenly decided to drop the kneeler down full force... with the foot of it landing directly ON MY FOOT (which was clad only in a dainty ballet flat).  Before I had time to react, the two children of the family decided to JUMP onto the kneeler, and every one of their movements wedged the kneeler foot deeper and deeper into the tiny bones at the base of my second toe.  I wanted to scream in agony, but that was not exactly an appropriate reaction in the middle of a quiet, solemn Mass.  There was nothing to do at that point but to screech-whisper a few frantic, "My foot!!!"s, until the guy beside me finally realized what was going on and got his kids off the kneeler.  (And then I spent ten minutes trying not to cry.)  Don't worry -- I survived, albeit with a bruised and throbbing foot.  But I'm telling you this story in the interest of public safety:  Steel-toed boots should be standard footwear with Sunday best clothes in Catholic churches from now on!

Luckily, when we got back home after church, there were still some of these scrumptious nutty chocolate tidbits leftover from our earlier lunch party.  A bit of chocolate fixes everything, doesn't it?  These sweet little treats are something like the two-bite brownies you can buy at the grocery store, but mine are a healthier version, made with almond flour and chia seeds instead of white flour, and applesauce and agave nectar instead of white sugar.  They are also gluten, dairy, and egg-free. 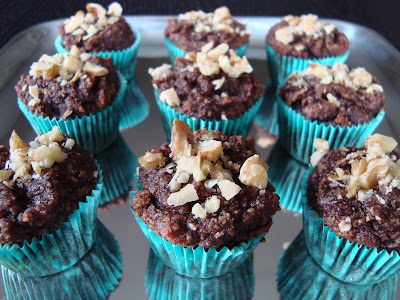 Preheat the oven to 350 F.  Line a mini-muffin tin with 24 paper cups.
In a large bowl, combine the almond flour, cocoa powder, arrowroot powder, sea salt, and baking soda.  In a smaller bowl, combine chia seed gel, applesauce, agave nectar, and vanilla.
Pour the wet ingredients into the dry ingredients and stir until thoroughly combined.
Using a teaspoon, fill each of the mini-muffin cup liners to the top with batter and sprinkle chopped walnuts on the surface.
Bake treats for 20 minutes, or until a toothpick inserted in the centre of a tidbit comes out clean.  Cool and serve.

These almond flour chocolate goodies come in handy in any case of accidental foot-crushing, and their small size makes them also perfect for satisfying a sweets craving without overdoing it.  Yum!