A breakdown of the first week back to school (and perhaps a mental breakdown, too) 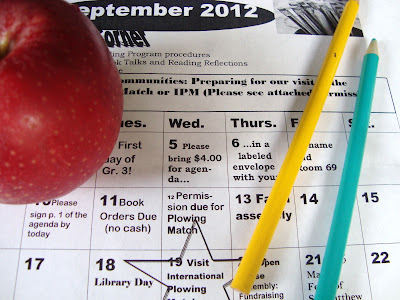 Remember eons ago (oh, wait, it was only this past Tuesday -- it just feels like eons ago) when I wrote something about keeping the mood "light and happy" at home this fall, and about carrying summer's "peaceful glow" with us as we move into the more hectic months?  Well, I have one word to say about that today:  HA!

I started the week with really good intentions, honestly.  I was organized as organized could be when the boys started back to school this week, and I felt prepared to glide us all smoothly through the transition from summer's laid-back days to fall's hustle and bustle.  Tuesday went perfectly; everybody was cheerfully up bright and early in the morning, the boys got off to school without a hitch, and I spent the day efficiently but still calmly doing errands that I had planned on taking care of once the boys were otherwise occupied.  After school, we talked excitedly about the boys' first day, I neatly filled out several sheets of school paperwork that had been sent home, we had a pleasant dinner together and I packed nice lunches for the next morning, and everyone was tucked into bed at a reasonable hour, content with how well we had all managed the first day back into the routine.

Wednesday morning felt a little rougher, but not overly so; I expected to have a bit of difficulty adjusting to waking up earlier and on schedule every morning again.  Will dawdled a little more through breakfast and I had to hurry him along a little when it came time to getting his shoes on and tied, but we still made it to school with time to spare.  I felt like I had a lot of things to accomplish in the short hours that the boys were at school, and was becoming mildly irritated by how many times I was being interrupted by a phone call from either a duct-cleaning company or a political candidate.  After school, there were more forms to fill out, and I had to go looking in pockets for the exact change I needed to send into school for agendas, etc., because I had already used all of the small bills and coins I had in my wallet the day before to pay for similar school items.  Dinner went smoothly; Will even came to the realization that he actually likes swiss chard (!?!), but I was decidedly less keen on packing lunches again for the next day.  By the time I went to bed (still at a reasonable hour), I was feeling pretty darn tired, and not particularly looking forward to waking up early again the next morning.

On Thursday, all hell broke loose.  The boys were bickering at the breakfast table, Will ate breakfast painfully slowly, and then he had the nerve to chide me that we were going to be late when he finally showed up at the front door to get his sunscreen on ten minutes before the time the school bell rings.  My plans to go to the market first thing in the morning fell through because I ended up having to wait for chickens to show up at our house (not as weird as it sounds -- it was a delivery from the farm where we buy our meat), so that left me awkwardly lugging huge bags of carrots and peppers and kale through market crowds in the heat of the afternoon AFTER I went to the dentist.  The phone rang 4963 times to remind me to go vote or to ask me if I had any gently used clothes to donate while I was trying to deal with laundry and housework, and the 3:00 school pick-up time seemed to show up in the blink of an eye.  Between the hours of 3:00 and 6:00 I could feel steam billowing out of my ears and I thought my head might explode.  There were field trip permission forms and monies due (requiring more exact change, which involved scouring through trinket boxes and car consoles and couch cushions to find this time), a French program information form, homework and gym and library schedules to wrap my head around, and a personal information form for Will's teacher that asked me to outline my child's likes, dislikes, favourite actitivities, hopes, fears, etc. etc. etc..  Will had math homework that he required help with (and was not happy about because he didn't understand one of the questions), and I was supposed to have dinner ready by 4:45 so that we could get to the swim club by around 5:30 for swimmer assessments.  In the middle of this chaos, somebody showed up at my door to remind me to vote (because, you know, the 4963 phone calls weren't enough), and Matt got stuck in traffic on the way home from Toronto.  The homework got done, we wolfed down dinner, we made it to the pool (where another mom and I should have earned an award for problem solving skills after we successfully drew up a carpooling plan that gets five kids from three families to and from swimming four times a week when two of the families' cars only hold four kids), we got the boys home and in bed, and then I scraped myself off the floor to go pack lunches (AAAARRGGGGH!) for the next day.  Finally, because I am a sensitive, thoughtful, perfectionist mom who loves her kid and wants his teacher to love him too, I sat down and wrote a novel for Will's teacher on that form asking about who he is.  I did not get to bed at a reasonable hour.

This morning was Friday.  Thank goodness.  I somehow felt calmer again, knowing that there was only one more school day this week to get through (with no lunches to pack tonight and two weekend days to deal with any more forms that might come home!).  The boys and I had a very pleasant breakfast together, with engaging and excited conversation over the news that scientists had successfully teleported quantum information a distance of 143 kilometres.  Will got ready pretty much on time, and I was feeling once again like everything was going well as we prepared to head out the door, and then Noah, out of the blue, said, "Mom, I want to walk to school on my own.  It's embarrassing now to be seen with you and Will."  Ouch.  After mildly protesting that I was not embarrassing, I good-naturedly agreed to let Noah leave a few minutes before Will and I (and then felt like a little hole had been punched through my heart, because while I know that he doesn't need me to walk with him to school, as a mom it still stings to know that he doesn't want me to anymore.  At least Will, that sweet boy, tried to patch up the hole by reassuringly stating, "I don't know what he's talking about, Mom.  I don't think it's embarrassing to walk with you."  Bless his heart.)

Yep, it has definitely been a week of changes, and I have not handled them as gracefully or as calmly as I would have liked.  Thankfully, I'm still optimistic enough to believe that next week will somehow be better....
Posted by Lisa at 4:20 PM