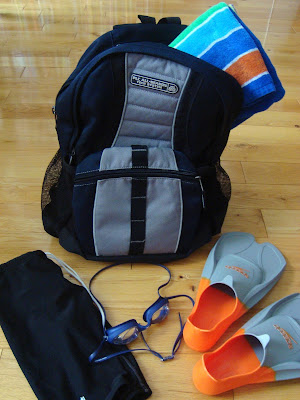 This week swim practices started back up for both boys;  Noah is at the pool four times a week this year, and Will is there twice.  That means six opportunities every week for their stuff to get lost somewhere in the black hole that is the university pool's men's locker room.  I get twitchy just thinking about it.

Based on the boys' previous poor records in the "making sure we have all of our stuff before we leave the change room" department, I am not so foolish as to actually believe this year will be any better.  Still, I sent them both to the pool this week with swim bags full of all of their necessary gear, carefully labelled with their names, and a hopeful reminder about mental checklists and double-checking their bags at the end of the evening.  And then I crossed my fingers and waited.

Noah is two for two so far;  both nights he's had practice, he has returned home with everything stuffed back in his bag.  (Wait, could this be a turning point?  Is this one of the positive changes that parents see in eleven year olds, an increased ability to be responsible for their own stuff?  If so, I'll gladly take it, because it will help to offset the other, not-quite-so-pleasant changes I've noticed in Noah in the few weeks since he started grade 6.  The fact that he is rolling his eyes right now at this statement while he reads it from his Playbook in his bedroom with the door closed and is muttering under his breath that I just don't understand will give you an idea of what I'm talking about.)  But Will, who had his first practice at the pool last night, got off to a bit of a rougher start in the keeping track of stuff department.

Matt was heading down the stairs to meet Will outside of the locker room after practice, once he figured Will would have had enough time to have showered and changed back into his clothes.  He was greeted on the staircase by one of Will's buddies, who was dressed and ready to go home, and Will, who indeed had his backpack with most of his swim stuff in it, but who was also still clad only in his Speedo and goggles.  Will and his friend simultaneously started shouting at Matt, "SOMEONE STOLE MY CLOTHES! / SOMEONE STOLE WILL'S CLOTHES!".  Thus began a search of epic proportions.

Now, because I wasn't at the pool last night, these next details in the story are a little fuzzy and, frankly, incomprehensible to me.  It seems that Will had put his stuff in a locker right by his friend's locker when they got to the pool.  His friend had no trouble locating his own locker and clothes afterwards, and apparently they had checked the locker they thought Will's stuff should be in, but "it wasn't there".  It would seem to me that all that they needed to do once Matt arrived to help was to check the lockers close by the one where Will thought he had put his stuff and, assuming the clothes hadn't indeed been stolen (which was very unlikely, because no university student could possibly be interested in Will's tiny size 6 children's clothing or size 13 shoes), the search should have easily turned up his things.  But apparently it didn't quite go that way.  Matt and Will and his buddy scoured every locker in half the change room with no luck, and Matt even went to speak to the people at the front desk to see if anyone had heard of any incident involving kids' clothes.  At one point during the search, a frantic Will exclaimed to Matt, "CALL MOM!  CALL MOM!".

When I heard this bit of the story last night after everyone was back home (and, I might add, wearing clothes, which eventually were found in the exact locker where Will had left them), I couldn't help but laugh.  I wondered what on earth Will thought could be accomplished by calling me at home in the middle of this crisis.  Even if I had been there, I wouldn't have been able to go into the men's locker room to find his stuff.  I asked Will what his reason was for wanting to call me, and he said, "Well, you know, you're the one in this family who is the most organized (and he used finger quotation marks when he said the word "organized", as if he were highlighting it as some rare skill I possess).  It seemed that in his moment of panic, he was clinging to the desperate hope that if he called "the organized one" in the family, maybe his missing clothes might somehow magically reappear.

I'm glad things ended well and Will had clothes to wear home from the pool last night, and I hope that this incident might make Will a little more receptive to the suggestions I often give him for being more "organized" himself. Will might regularly argue with me and point out that I'm wrong about things, but at least he recognizes my apparent superpowers in his time of need.  It's nice to be appreciated.
Posted by Lisa at 1:32 PM