This past weekend was what I would consider a perfect end to a really fantastic summer.  We spent some time catching up with good friends, soaked up the sun and splashed in the pool as a family, enjoyed leisurely pancake breakfasts and delicious grilled dinners peppered with happy conversations, and strolled through the neighbourhood on foot/bike/scooter in the evenings. (Will even agreed to ride his bike one night and we were all really proud of him for overcoming his worry about it.) We laughed a lot (most notably yesterday afternoon, when Noah was performing hilarious shenanigans on the floating mattresses in the pool, Will was shrieking with hysterical delight watching him, and Matt and I were cracking up because I realized that Will sounded just like the riled-up chimpanzees in a documentary we had watched recently).  We also spent just a little time getting organized and doing some baking to make the back-to-school transition easier on everyone.  Each of us felt a little sad watching the last sunset of summer holidays as it glimmered between the leaves in our backyard trees yesterday evening, but I know I also felt a deep happiness and gratitude for the wonderful months we've all been able to share together. 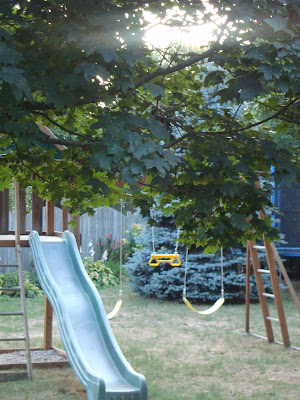 This morning's return to early rising and moving through routines went very smoothly in our house, thankfully.  Despite the fact that it poured rain all day (as if nature wanted to acknowledge the transition from summer to school), I refused to pay too much attention to it.  I'm determined to keep the mood light and happy at home through the fall, to carry summer's peaceful glow into these more hectic months.  I talked with the boys over breakfast about what might be exciting at school today, admired their carefully chosen new running shoes and ball caps as they donned them at the front door, and sent them off to their first day of school with their favourite snacks and a note in each of their lunchbags that I hoped would make them laugh: (The boys are both big fans of the Annoying Orange videos on YouTube.  Have you seen them?  They're.... well, annoying.  But the boys think they're hilarious and I thought I was pretty hilarious, too, when I came up with this idea for a lunchbox note using a picture of the Annoying Orange himself!  I was glad to hear at the end of the day that Noah and Will agreed with me!)

When I went at 3:00 to pick the boys up at school, they both burst outside with huge grins on their faces, and they both began talking at me a mile a minute in unison about their fabulous first day.  I am feeling so very good about the start of this school year after hearing them enthusiastically tell their stories.  Will got a teacher who I think will be excellent for him (Noah had the same great teacher in grade 3), and while some of Will's closest friends are in different classes than him this year, he is happy about getting to spend time with other friends he hasn't shared a classroom with in awhile.  He's also thrilled with his teacher's cool classroom supplies -- a big bin of Lego, awesome board games, and a fantastic and varied collection of reading materials, including sports magazines, Calvin and Hobbes books, and the entire Harry Potter series!  (Picture sixteen exclamation marks after that last statement and you'll have a sense of how Will said this the sixteen times he told me it.)  Noah's long list of wishes for grade 6 all came true:  he got the same wonderful teacher he had last year (this was secretly on my wish list for him, too!), he's in a straight grade 6 class rather than a split, he's in the school building and not in the portable this year, and for the first time in a few years, all of his closest friends are his classmates.  But the most incredible detail of Noah's day was that one of his new classmates, a boy who just arrived this year from a different school, is the very same boy who was Noah's best friend in kindergarten, before we moved neighbourhoods and lost touch with him!  How amazing is that?!

Last night when we went to bed, I think all of us were a little nervous about how things would go today.  Noah chose the shirt he wore this morning because he said it accurately reflected how he felt about going back to school: 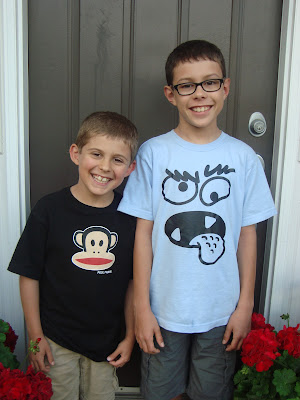 After today's great beginnings, though, I'm pretty sure we're all going to bed smiling.
Posted by Lisa at 8:39 PM