As we journey through the beautiful and complex experiences of human life, we all take our turns at encountering difficult challenges, some of which shake us to our very core.  Whether it's a major health issue, a heartbreaking loss, a drastic and unexpected change, or an earth-shattering revelation, when we find ourselves facing such life-altering moments, it can feel like they might just swallow us whole. Sometimes in these situations, our overwhelmed hearts give into despair, and we curl into a ball and retreat from the world for awhile, lost and afraid. Sometimes, though, the human heart musters up remarkable courage and resilience, and finds deep within it an unending hope that wills things to somehow be different. Today I want to share a truly inspiring story of a beautiful woman and her family, who walked straight into one of life's most fearsome realizations with bravery and love, and emerged on the other side of a miracle.

This the story of Erica (Holmes) Harris, as told by Kara Hoffman in an article at SooToday.com: 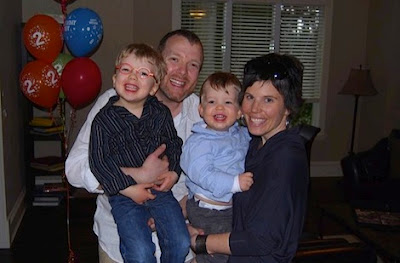 Erica Harris is one of those gals you just don’t forget ...
Full of life, smart as a whip, gorgeous inside and out.
She’s married to the perfect guy, Harley, and has two of the cutest boys, ages 5 and 2.
She is amazingly passionate about health and wellness and previously served as a bustling chiropractor.
She is a dedicated Mama, living life on the North Shore to its fullest.

That is, until this spring when a routine blood test raised immediate panic.
Within days, she learned she had AML - acute myelogenous leukemia - a very serious, aggressive form of blood cancer.

Within an instant, Erica’s life had changed course, completely.

She was diagnosed on June 7 and was admitted to Vancouver General Hospital hours later.
As she left for the hospital, she explained to her older son that we all have these little fighter guys in our bodies that help keep us healthy by fighting bugs from colds but Mama's fighter guys just weren't working well right now.
As she walked out the door, her little guy shouted "go fighters go!" - and this became the mojo behind Team Harris.

Erica immediately started chemotherapy to kill all the "bad’"cells her bone marrow was producing.
Unfortunately, this first round of "chemo" didn’t do its job.
Erica had to undergo an even more aggressive round of chemotherapy, called “salvage chemo.”
Along the way, she endured many life threatening infections, had kidney failure, awoke unable to breathe as her lungs were swimming in fluid, had unexpected surgery, and required many blood transfusions.

She was told at the start of the salvage chemo that she would require a bone marrow transplant following remission as her leukemia was so aggressive.
At this time, Harley embarked on an amazing campaign to raise awareness for One Match in hopes of finding a stem cell/bone marrow donor match as Erica's only sibling was not a match.
Family and friends were desperately encouraging people to register with One Match as they knew that at some point Erica would need this transplant to survive.

Great news came on July 30 that a perfect bone marrow match (10/10!) had been found for her somewhere in the world.
This great enthusiasm, however, was short-lived.
The very next day, Erica and Harley learned the salvage chemo was not successful as Erica's marrow was still riddled with leukemic cells.
To be a candidate for transplant, she first had to be in remission.
She was offered no further treatment or testing aside from supportive care in the outpatient unit.
Her prognosis was estimated at a couple of months.

The Harris duo returned home to spend the next few weeks together with their boys as a family.
Never giving up hope, Erica and Harley vowed to stay strong and fight.
Erica was blessed with so many friends and family who spent tireless hours researching and contacting others on her behalf.
With this insight, they embarked on their path.
Erica started an intense regimen of supplements, high doses of IV vitamin C, she changed her diet, followed a juicing plan loaded with nutrients and found such comfort in the power of prayer, meditation and love.
Harley stayed by her side every step of the way since the minute she was diagnosed ... fighting for the best care, talking with specialists from all over the world, ensuring her nutrition/meds/supplements were perfectly adhered to, and holding her hand through all the ups and downs and for every pain staking poke.

Little did they know, deep down in that “never quit” bone marrow, there was a true miracle happening.
Erica’s body started to respond to every little bit of love, hope and faith it had received.

On September 7, 2012, Erica, Harley and her brother Matthew sat with mouths agape in the day care unit at VGH as they learned Erica was in full remission.

Erica is absolutely humbled by everyones' efforts on her path and no words can describe how she feels with this amazing gift of life and hope she was blessed with from above.

All this means that Erica went from having a diagnosis of “months, at best, to live” to “be ready for a bone marrow transplant in October of this year”.

Erica is ready for this.
Her husband, family and friends are ready for this.
As Erica prepares for yet another lengthy hospital stay, her whole ‘circle of love’ will be cheering her on, willing her body to its highest level of strength and supporting her entire family.
All is set for her transplant to start on October 19 at VGH.

Reading the incredible update to Erica's story this week sent chills down my spine and flooded my eyes with tears.  It is a testament to the power of the human body to work at healing itself given the right physical nourishment, and a testament to the power of the human spirit to flourish when surrounded by love and hope.  In this season of Thanksgiving, I am so very happy for Erica and her family, who I'm sure must have a profound appreciation for what a precious gift time spent together is.  I'm grateful, too, for the reminder that we should walk through life with strength and peace, and with our hearts wide open, even if that leaves us vulnerable.  Anything is possible.


***
Friends of Erica in her childhood hometown of Sault Ste. Marie, Ontario have set up a trust fund to help her and her family as she continues on her journey to wellness.  If you are interested in making a donation to the fund, you can find more details here.  ﻿
Posted by Lisa at 2:41 PM