At Noah and Will's school, one of the requirements of students once they reach the junior grades is to bring a change of clothes for gym days.  I like to encourage the boys to be responsible for more of their own stuff as they get older, so when Noah reached grade four and started needing gym clothes two to three times a week, I made it his job to take the used gym clothes out of his bag when he came home, put them in the laundry basket, and replace them with a fresh set of gym clothes on the days when he needed them.  While Noah is very good at remembering to take the used clothes out of his backpack, he still sometimes needs reminding on the morning of gym days about the putting new clothes in bit.  I'm okay with that, though -- it's a learning curve, right?

Yesterday morning, I was very pleasantly surprised when Noah remembered, completely of his own accord, that he should put gym clothes in his backpack, and it wasn't even gym day yet.  Turns out he was confused about what day of the week it was because of the holiday Monday, but still, I praised him for being organized ahead of time and encouraged him to put the clothes in his bag, anyway, so that he wouldn't have to think about it again the next morning.  I sent Noah off to school feeling really good about the fact that my sometimes scatterbrained (though very intelligent) son seemed to be getting better at thinking about the little day-to-day details as he got older.

When Noah arrived home from school yesterday afternoon, I checked his school agenda, signed it, and was putting it back in his bag when I noticed the crumpled up wad of still-clean gym clothes sitting in the bottom of his backpack.  Because crumpled up wads of clothes drive my neat-freak self crazy, I pulled the gym clothes out of Noah's bag to smooth them and fold them nicely, and that's when I made an interesting discovery.  Noah had packed a t-shirt in his bag; that was fine.  But to go with it, he had absent-mindedly grabbed one of the Speedos he wears for swim practice from his drawer and thrown that in his backpack instead of his athletic shorts. 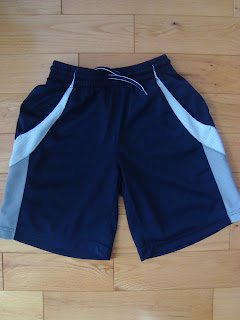 The Speedo he wears for swim practice is anything but: 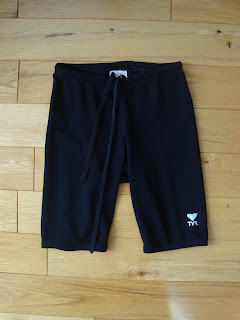 When I held that Speedo up for Noah to see what he had packed (with an amused look on my face, I might add), the look on his face was a fascinating mixture of hysteria, horror, and immense relief.  I'm sure a million humiliating visions were running through his head as he pictured what would have happened had he actually had gym class that day.  Thanks to my neurosis, he got a second chance and was able to exchange the Speedo for the right athletic shorts, thus saving him the embarrassment of being the story that everyone remembers at the 25 year elementary school reunion.  I think he's now reconsidering his views on just how much 11-year-old boys still need their mothers.

Without saying a word about it, Noah didn't leave early to walk to school on his own this morning; he instead cheerfully chose to accompany Will and I.  I guess compared to being seen in your Speedo in front of your whole grade 6 class, being seen with your mom isn't that embarrassing after all.
Posted by Lisa at 2:06 PM