Last Thursday the weather was so perfectly beautiful outside that I decided to make an impromptu stop at the farmers' market on my way home from yoga class.  I was drawn to the bins full of lovely orange pie pumpkins and couldn't leave without some (even though my arms were already full of other veggies and I ended up making a spectacle of myself trying to juggle multiple orange orbs back to my car through the crowds!).  When I got home, I decided to make my own pumpkin puree for fall baking, so I roasted all of the pumpkins and ran them through the food processor using this method from The Whole Life Nutrition Kitchen.

With four jars of homemade pumpkin puree on hand, I was excited to get working on my goal of creating a pumpkin dessert for Thanksgiving that does not contain eggs, dairy, or gluten.  When I found this recipe at Oh She Glows for a pumpkin pudding thickened with chia seeds rather than eggs, I knew I had found my starting point.  I created my own version of the pudding, poured it on top of a nut crust baked in mini mason jars, and topped the whole thing with whipped coconut cream, chopped pecans, and a sprinkling of cinnamon.  The end result was scrumptious (and so cute!), and I'm really looking forward to sharing more of this dessert with everyone around our Thanksgiving table this coming weekend. 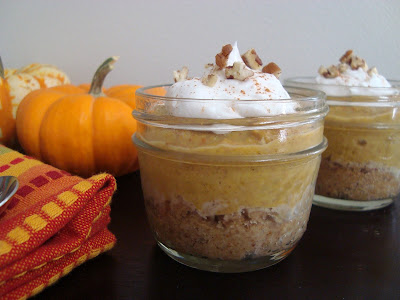 For the pumpkin pudding:

For the whipped coconut cream:

Preheat the oven to 350 F.  In a medium sized bowl, whisk together the coconut oil, maple syrup, and vanilla extract for the crust.  Add the ground pecans, almond flour, and sea salt and stir until all ingredients are well combined.  Divide this nut mixture between eight 125ml mason jars, and press the mixture into the bottom of each jar.  Place the jars on a baking sheet and bake the crusts for approximately 20 minutes. Remove from the oven and cool completely.

To make the pumpkin pudding, whisk all of the ingredients (pumpkin puree, almond milk, cashew butter, maple syrup, chia seeds, vanilla extract, and spices) together in a large bowl until the mixture is smooth.  Spoon the pudding into the eight mason jars, on top of the cooled nut crust, and place the jars in the refrigerator for at least an hour to chill and set.

When you are ready to serve the mini pumpkin pies, whip the coconut cream for the topping.  Take the can of coconut milk out of the refrigerator and remove the lid. Gently scoop out the solid coconut cream and place it in a bowl. Pour any remaining liquid coconut water into a jar for another use. Whip the coconut cream with a handheld mixer for 1 minute, until it is light and fluffy. Whip in the maple syrup and vanilla.

Remove the mini pumpkin pies from the fridge.  Top each one with a dollop of the whipped coconut cream, and a sprinkling of chopped pecans and cinnamon.   Voila -- you have a delicious pumpkin dessert that is sure to put a smile on the faces around your Thanksgiving table!

Do you enjoy what you read here at Pocketfuls?  Please click here to vote for me in the Circle of Moms Top 25 Canadian Moms blogging contest.  Even if you have already voted, you may continue to vote once a day from now until October 11.  I am currently sitting somewhere near #29, so a spot in the top 25 is within reach, but I will need your help -- there are several other blogs who are very close to mine in the number of votes!  Thanks very much again for your support.  xo