Every October, from the time the boys were very small, our family has always chosen a beautiful fall weekend day to make a trip to a local pumpkin patch. It's so much fun to be outdoors, surrounded by gorgeous colours, breathing in the crisp autumn air under a blue sky while taking our time choosing the perfect pumpkins to carve into jack-o-lanterns for Hallowe'en. This year, though, we were busy most October weekends, and we left the picking of pumpkins for this past weekend when we finally had some free afternoons. Apparently, the weather had other plans. When it came to Sunday afternoon, and the rain hadn't let up at all, and Hallowe'en was only a few days away, we all looked at each other, came to a unanimous decision to bail on the pumpkin patch (which was sure to be a swampy mess), and instead took a two minute family drive to the neighbourhood grocery store. The four of us ran through the cold drizzle to the parking lot pumpkin display, quickly threw any two pumpkins that looked passable into a cart, paid for them, and ran back to the car, where we then laughed hysterically about our most pathetic pumpkin acquisition ever. Sometimes the most unphoto-worthy moments make fun family memories, too!

The rainy weather was good for something, though:  we did have some fun in the kitchen making up a few healthy Hallowe'en themed snacks to enjoy this week.  If you're looking for a creative way to fuel up your ghouls and boys with nutritious foods before Hallowe'en, these recipes might just do the trick! 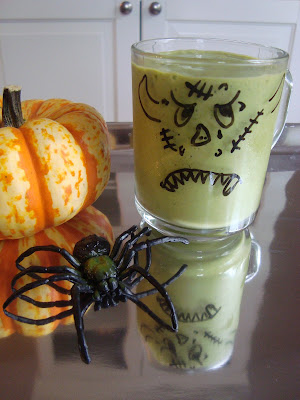 I am a huge fan of Angela Liddon's (Oh She Glows) Green Monster Smoothies.  I blend one up in the morning several times a week for myself and love it as a quick, healthy breakfast or snack.  Yesterday I thought I'd try to entice the boys to drink one, too, by having them each draw a monster face on a clear glass mug with a black dry-erase marker, and then serving them a smoothie in it.  Noah and Will still wouldn't drink the green smoothie (sigh), but they did have fun drawing faces on mugs, and the dry erase marker wiped off easily afterwards.  If your children are not revolted by the sight of green things that have been pulverized in a blender, then you may want to try making them either Angela's original version, or my own favourite variation of the Green Monster Smoothie below -- they really are delicious!

Place all ingredients in the order given in a blender. Blend until smooth. Pour smoothie into a glass (with a monster face drawn on it!) and enjoy. 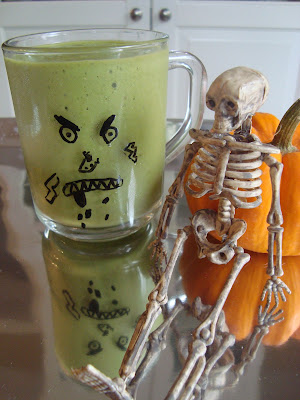 Determined to come up with a healthy Hallowe'en snack that my boys would eat, I decided to experiment with raw cashews and pumpkin puree to make a tasty dip for apple slices and carrot sticks.  I was really pleased with what I ended up with -- the dip was flavourful, nutritious, and a hit with the whole family. 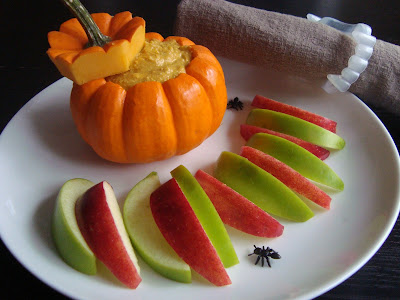 Place the cashews in a Magic Bullet or blender with enough water to just cover them.  Blend the cashews and water until smooth and creamy.  Scoop the cashew cream into a mixing bowl.
Add the pumpkin puree, almond milk, maple syrup, and cinnamon to the bowl.  Mix all ingredients until they are well combined.  Spoon the dip into a mini pumpkin that has been hollowed out, and serve it with apple slices and/or carrot and celery sticks.  Yum!

I hope for all of the kids' sake that the rain will hold off long enough Wednesday for trick-or-treating.  Somehow I don't think a quick dash to the grocery store would quite cut it in that case.  Have a safe and happy Hallowe'en!

Email ThisBlogThis!Share to TwitterShare to FacebookShare to Pinterest
Labels: eating well, for the kids, holidays